I loved this book.  It reminded me of the style of  The Sparrow by Mary Doria Russell.  It has phenomenal prose with a terrific story.  The setting of the story is in an ancient Mayan ruin in the Yucatan peninsula.  It is a tale of an archeologist and her estranged daughter wrapped in the supernatural and Mayan mythology.    I was really emotionally moved by the mother-daughter relationship tale and gripped by the mystery of the spirits of the ruins.  I read this book in two days thanks to a snowstorm that kept me home from work one day 😊.  The author is a co-founder of the James Tiptree Award, now known as the Sideways Award, which honors books that explore or expand on the understanding of gender in science fiction and fantasy.  This book won Murphy the Nebula Award for 1987 and was also nominated for the Mythopoeic Award. 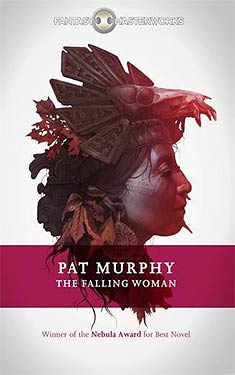 Elizabeth Butler is a renowned archeologist whose books challenge the accepted understanding of the ancient Mayans.  She is on a dig in Dzibilchaltun on the Yucatan peninsula.  Unexpectedly, her daughter Diane arrives from the states after her father’s death and quitting her job.  She wants to stay with Elizabeth and help on the dig.  She agrees, but their relationship is strained at best.  Now, Elizabeth has had the ability to see ancient spirits since her suicide attempt as a young woman.  At the dig, she sees and speaks to the spirit of a Mayan holy woman who leads her to a burial site at the dig.  In exchange, the holy woman wants a sacrifice to help bring forth the reign of the goddess Ix Chebel Yax.

The characters came alive for me in this book.  The emotionally distant Elizabeth, the confused Diane, as well as the other academics on the dig were all well-crafted.  I found myself empathizing with them.  Even the two local men who are on the make with Diane and her hut-mate Barbara were more than one-dimensional.  I think the excellent character development dovetailed on the richness of the prose.  The details of the characters and the setting never felt extraneous, but always organic and necessary to the text.

Both Elizabeth and Diane were complex characters.  I particularly like Elizabeth.  She had been hospitalized after her suicide attempt and called crazy by her ex-husband.  She accepted her interactions with the spirits as a new normal in her life.  But for the reader and her fellow archeologists who heard her speaking Mayan to herself, there was always the question of whether she really was crazy or not.  Diane has also begun seeing spirits, though not to the extent of her mother, and she doesn’t necessarily believe in the fleeting shadowy images.  She doesn’t exactly know why she has come to Mexico to be with the mother she barely knew and struggles with her own inner demons.

I give this book five stars out of five.  It was a pleasure reading it.  It was very interesting reading about the Mayan pantheon and the complex Mayan calendar.  I thought the interaction between Elizabeth and Diane was very realistic, devoid of saccharine, soapy melodrama.  The realness of it is what made me get so emotionally involved with the characters.  The supernatural aspect is not overbearing either.  It progresses at a decent pace through the book, not overwhelming the story until its natural conclusion at the climax.  Overall, this is simply a beautifully written book that kept me turning the pages and feeling emotionally involved the whole way through.