I love being surprised by books, as is probably evident by how many of my reviews start out with “I was surprised by this book”.  This is the first book of the second set of five in the Amber Chronicles, in other words, the sixth in the series.  These latter five, which follow Merlin of Amber, are downplayed by fans as being not as good as the first five, which follow his father Corwin.  I really liked it, however.  It plops you right into action and over the course of the book, catches you up on who Merlin is, what may or may not have happened to his father, reintroduces his aunts and uncles, and works you into Amber and its Shadows.  There’s some info dumping, but I rather liked it, giving me a chance to remember what the Amber universe is about, having read the first five about six months ago.  With all the books I read, I don’t remember the details of most of them, so this is a good thing.  This book won the Locus Fantasy Award in 1986. 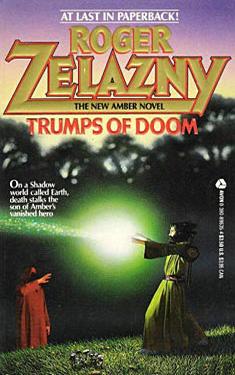 Merlin is known as Merle Corey and is living on Earth which is one of the Shadows of Amber.  It’s April 30th and he’s waiting to be assassinated, as he does every year on this day.  He doesn’t know why; he’s just come to expect it.  His ex-girlfriend Julia is killed by a strange and terrible beast.  Luke, one of his best friends, is almost killed by an unknown assailant.  After all this tragedy, he goes to upstate New York to see his father’s lawyer and confidant, Bill.  He unloads all the strange tragedy that’s hit him.  But danger rears his ugly head there and he and Bill jump to Amber through one of Merlin’s trump cards.  There he discovers one of his uncles has been killed and another nearly so.  And so he begins a journey through Shadow to discover the mysterious force that’s trying to kill him and his familiy and protect the Ghostwheel, a device of power he created which just might destroy Amber.

Like most of the Amber books, this one is pretty short, just over a hundred and eighty pages.  But as you can tell by the plot, a lot is packed into it.  I felt like Zelazny’s writing had improved over the first five.  It’s a little prosier, a little more mature.  The prose doesn’t get in the way of the action or the plot, though.  I thought it enhanced the world building and made the action very readable.  Being almost half a year since reading the first five, I thought I’d have trouble getting back into the Amber mode, but I had no problem being plopped into it and zipping right along with Merlin.

I thought the character of Merlin was quite good.  The book is told in first person, so it’s easy to get into him.  He’s much like his father, but doesn’t drink, smoke, and carouse as much.  He’s less of an every-man than his father, being a brilliant computer programmer, but he’s still relatable.  He’s a loner and cynic, despite being a wizard himself.  He has a polite relationship with his aunts and uncles, as a nephew would of the older generation.  Since the first five books, those aunts and uncles have all lived in relative peace with one another, even Fiona, who was initially pretty evil.  She even watches out for Merlin as he tries to figure out who is after him.  There isn’t much other character development as few of the other characters really come to the forefront.  Those that do are enigmas that Merlin is trying to figure out.

I give this book four stars out of five.  It’s a fast, easy read that’s wildly entertaining.  All the books in this second half of the series are short, and I expect, like the first five, that my reviews will get shorter as I progress through them.  Once again, I’ll be reading these books one after another to keep myself in the Amber universe.