So the series ends with a sigh.  Not a shout.  Not a whimper.  In this last book, everything comes together a little too nicely.  And there are some plotlines that are still unresolved, or at least glossed over, as if there was more to come.  This may be apocryphal, but I read in a few places that Zelazny was planning another five books in the series.  He did write five short stories in the Amber universe, but I’m not sure where they are in the timeline.    The book is pretty fast-paced and readable, and the buildup is strong.  But the climax left me feeling empty. 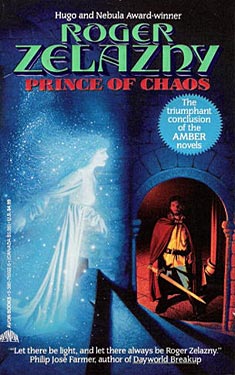 Warning: The rest of this review has spoilers for Knight of Shadows, and well, all the last four books.

Merlin returns home to the Courts of Chaos upon the death of its king.  Merlin is suddenly third in line for the throne as heirs before him have either relinquished their claim or have died in mysterious ways.  It is not known who is killing them off.  His half-brother Jurt is one or two behind him in the line.  Jurt contacts Merlin and tells him he has called off his vendetta because he is afraid of the powers that seem to be in control.  Merlin accepts his apology and the two work with Luke and Nayda to get to the bottom of the mysteries of the murders, the conflict between the Pattern and the Logrus, the controlling efforts of Merlin’s mother Dara and his half-brother Mandor, and the whereabouts of his missing father Corwin.

This is really just a light overview of the plot of this book.  It is actually a very complicated story.  The Pattern and the Logrus, the mazes of Amber and Chaos respectively, have become sentient and are sending ghosts to manipulate Merlin to align with them.  It appears that the Logrus has actually planned for Merlin to become king of Chaos since his conception.  It also wants him to marry Coral who has had the Jewel of Judgement implanted in her eye.  This would bring the Jewel back to the Courts of Chaos instead of in Amber.  Dara and Mandor each want Merlin on the throne and plan to manipulate him once there.  And these are just some of the major things happening in this book.

The writing is still terrific.  The dialogue is realistic.  I was a lot less confused in this book compared to “Knight” despite everything going on.  On the downside, there’s a deus ex machina in the form of a ring that gives Merlin a lot of power.  Between that, the Ghostwheel’s power, and Jurt’s new found ability to jump just about anywhere, Merlin seems unstoppable.  Everything seems to go his way.  It’s the sum of these things that makes the ending feel lukewarm.

As a whole, I enjoyed the Merlin cycle, though not as much as the Corwin cycle, i.e. the first five books.  On the plus side for the Merlin cycle, there are many exciting parts and the complexity of the plots was fun.  And the writing felt more mature than in the Corwin cycle.  I liked Merlin himself, even when he was being too trusting and making bad decisions.  On the negative side, the books had some heavily psychedelic moments that were difficult to traverse, though once having trudged through, made the later parts easier to understand.  And of course, the flat ending.

I give this book three stars out of five.  It would have been four stars, save for the less than satisfying ending.  I give the whole Merlin cycle four stars.  I think it’s a darned good read.  Reflecting back on the whole Amber series, I think it illustrates Zelazny’s imagination and writing skills.  I was impressed by the elegant prose that did not require a thousand pages per book.  He was able to maintain complex scenes  and relationships with a literary economy that would make Robert Jordan or George R. R. Martin look like windbags.  Having now read Amber, I want to go through and read just about everything by Zelazny I can get my hands on.