My experience of Bujold is rather mixed.  I’ve loved a few of her books and either disliked or felt meh about the rest.  I’ve read eight altogether.  This one makes nine, and it’s another meh.  It has all the makings of an exciting space opera, and lord knows I have pretty mixed reactions to space opera.  I simply found it uninteresting.  I had to force my way through most of it.  This one even had a good message, but that didn’t help.  The only reason I read it is because I’m trying to finish my quest to read all the Nebula winners, which this one won for 1988.    It was also nominated for a Hugo and she was awarded a Grand Master title in 2020.  She has legions of loyal fans; I guess I’m just not one of them. 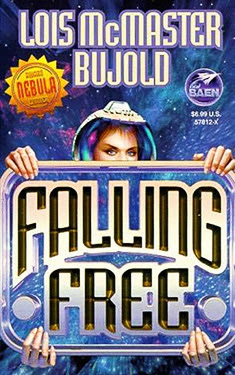 This book is about Leo Graf, an engineer who is brought up to a space facility above the planet Rodeo.  It has about 1300 inhabitants, a thousand of which are quaddies, genetically engineered humans who have four arms, two where they’re legs are supposed to be.  This gives them the ability to be very agile in zero gravity.  They are resistant to muscular atrophying and are very strong.  They are also indoctrinated to be highly skilled technicians subservient to the corporation that exploits their labor.  Leo is there to give advanced welding training to the quaddies.  He finds himself appalled that the corporation treats them as property, and eventually leads the quaddies into a revolt against their oppressors.

The characters felt two-dimensional.  I never really felt like I was in the heads of any of them.  The closest I came was to Silver, a quaddie hydroponics tech who helps lead the revolt.  She had a little more of a character arc than the rest, going from subservience to questioning in a rather realistic way.  I could never get into Leo’s head.  He’s a nice, smart guy but I couldn’t muster up any emotional attachment toward him.  And the bad guy, Bruce Van Atta, was very one-dimensional.  He’s pure, stereotypical corporate slime with absolutely no redeeming qualities.  He never questions his motives or actions.  He was so stereotypical that he became cartoonish.

I thought the writing was sufficient: not much prose, but the dialogue was fairly realistic.  Her writing was definitely better in her later books.  The world-building was good.  The space station and the quaddies were explained well.  I bought into the premise easily.  I actually became invested in the revolt and found myself a little more interested once it happened.  But I never felt fully invested in the book.  And the message of the book is good: you can’t treat people like property or assets, even if they’re different than you, or in this case, genetically modified.

I can’t say the book is bad, just meh.  I give it three stars out of five because of the world-building, the dialogue, and the plot.  I can say that Bujold has a great imagination.  The plots of all nine books I’ve read were smart, if not ingenious.  There’s just something about her writing that often does not enthrall me.  So generally, I don’t seek her out without motivation from a challenge.  I think other people who are more into space opera might enjoy this book.  And note, even though this is fourth book in the Vorkosigan Saga, it takes place two hundred years before the stories of Miles and his mother.  If you want to read the book in order of events rather than publishing order, this would be your starting point.