This book, the seventh in the Amber Chronicles, was less action, more mystery development than Trumps of Doom.  It featured one long, difficult chapter that was Merlin trying to figure out who is behind all the mayhem in Amber based on all his experiences so far.  It also featured a game of questions and answers between himself and another character where he was trying to get information that she had and vice versa.  These made the book drag somewhat, breaking up the pace that was set in Trumps.  The scenes were useful in bringing all the knowledge together, but they were a tough read.  I didn’t enjoy this book as much as Trumps but still have high hopes for the remaining books. 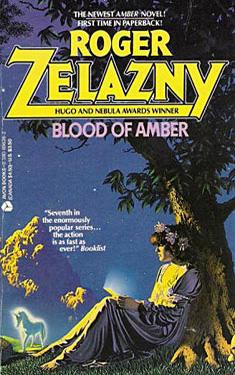 Warning: The rest of this review has spoilers for Trumps.

Merlin escapes from the blue crystal cave where Luke has imprisoned him.  He meets a hermit near a battle site who confirms his information about Luke and Jasra.  After being chased by a tornado powered by his mysterious enemy, he jumps to San Francisco where his aunt Flora is living.  They discuss what’s happened to him so far, ruminating on who is behind all the mayhem.  He jumps back to Amber and is assaulted by several assassins.  He’s helped by Vinta, the widow of the uncle who was murdered in the last book.  He finds out he has been followed by a shape-shifter who is supposedly trying to help him.  While at her family’s country manor, a wounded Luke appears asking for help.  Merlin leaves and tries to save Jasra, who has been captured by an unknown enemy.  This leads him to a direct confrontation with his own enemy, the force that has been trying to kill him and destroy all of Amber.

I think the biggest downfall of this book was the rehashing of events as Merlin meets different characters, namely Vinta and his aunt Flora, as well as his own chapter-long rumination on all the evidence.  While in one respect, it was good to get the data analyzed, in another, it dragged the book to a snail’s pace.  It did however get us some character development of Flora, who hadn’t had much page time through this series.  She added some levity to the situation.  The encounter with Vinta was good for helping tie together some loose ends of other minor characters.

I give this book three stars out of four.  It just didn’t have the wow of the previous book.  I like the characters and the prose is still terrific.  The book is very readable.  I became very aware of how well constructed the topography of Amber and its Shadows is.  The cliffhanger of this book is quite bizarre and has me a little wary of the next book.  I don’t have much else to say about this book, as it has the same basic structural qualities of the first book.  But I’m in for the long haul on this series and I do want to find out what is actually going on.