For some odd reason, I’m finding the second Amber Chronicles books alternately very good and confusing.  This book is a confusing one.  It starts out fairly normally, but quickly gets esoteric, almost psychedelic and metaphysical.  It made for some slow reading trying to figure out just what was going on.  The prose in it is very good, enhancing the world building by adding a new layer onto it, but it was hard to see how it fit into everything else. 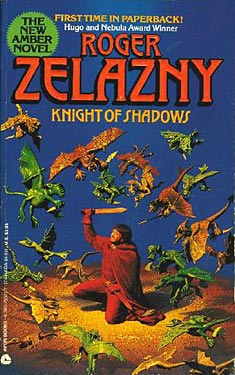 This book finds Merlin back in Amber with Mandor and Jasra after almost defeating Jurt and Mask.  They escaped however, and the three continue to try to figure out how to defeat them.  Then Merlin ends up in a strange monochromatic place which turns out to be a battleground for the powers of the Pattern and Chaos within him.  His journey through this place was interesting but confusing for me.  It felt like it was hanging out there almost as a side story to the main plot line.  In it, he is tempted by ghostly apparitions to decide whether to choose to align himself with the Pattern or with Chaos.  He doesn’t want to choose, but wants the two forces to live within him equally.

What I liked about this strange journey of Merlin’s is that it adds a whole new dimension to the Logrus, the ever-changing maze of Chaos, and the Pattern, the design that defines the existence of Amber.  The two powers exhibit sentience in the battle for Merlin’s allegiance and soul.  But being the son of the Corwin of Amber and Dara of Chaos, he wants them to live in harmony within him.  During this journey, his magical wristband Frakir which warns him of danger and helps him out of tough scrapes also gains sentience, communicating with him and advising him on how to proceed through this strange process.   However, as I mentioned above, it felt like out of place in the plot, suspending the quest to defeat Jurt and Mask for most of the book, and not really providing me with any real sense of how it related to the rest of the book.  It’s almost like Zelazny had a great tangential idea and forced it in somewhere, ending up in the ninth book.

I give this book three stars out of five.  I found it to be one of the weaker books in the series.  While the prose is still good, and the character development of the Frakir and the Ghostwheel is really good, it was just too esoteric for me.  It left all the plot lines in a jumble, even adding a strange twist in the end with Luke, his cousin, and Coral, his aunt.  Still I’m very interested to see how it all ties together in the tenth and final book.