This is a fantasy novel set during the Vietnam War.  It’s about an army nurse who becomes the possessor of an amulet that lets her see auras.   It’s really a war novel with a little fantasy thrown in.  The author was previously known for writing humorous fantasy novels, but with this book, she took a more serious turn and won the Nebula for 1989 for it.  It’s a powerful novel with a terrific ending that left me nearly in tears.  The prose is great.  The character development is really good.  The only thing lacking was the plot.  It reads like a memoir rather than like a developed novel.  The author says it is not autobiographical, but I’m sure the themes are based on her experience:  racism, sexism, the horrors of war, and what it’s like to be a life saver and caregiver in an environment of death and destruction. 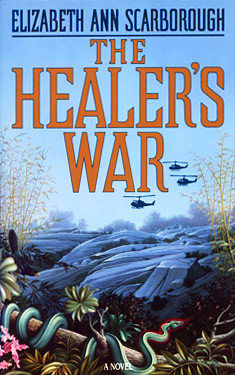 Kitty McCulley is an army nurse at a facility that treats both GIs and natives.  After nearly killing a young Vietnamese girl by administering the wrong dose of a drug, she’s transferred to orthopedics, i.e., the ward for people who have lost limbs.  She finds it to be a good assignment.  One of her patients is an old Vietnamese man whom she is told is a holy man.  Before he dies, he gives her his amulet that lets the wearer see auras.  When a new head doctor who clearly hates the Vietnamese people comes on board, he starts giving discharge orders even though they are not fully healed.  She tries to relocate a young boy with one leg to a decent facility, with her boyfriend supplying the chopper.  The chopper crashes and her boyfriend killed.  Now, with the young boy in tow, she must navigate the jungle to try to get them back to safety.  On the way she discovers the true power of the amulet and what it means to be a healer.

As I said, there isn’t much plot.  The first half of the book is Kitty’s life as a nurse.  She cares for patients, meets a handsome helicopter pilot named Tony with whom she has an affair, and generally makes due with her assignment.  The buildup of the amulet story line is very slow through this part.  She doesn’t get the amulet until halfway through the book.  Next thing you know, she’s going AWOL to take the boy to another facility, since his parents are dead and he’d be turned out on the street upon discharged.  Then the helicopter crashes, kills Tony, and she’s wandering through the jungle with the boy.

The second half of the book recounts her time in the jungle.  This is where it picks up a little.  She meets an African-American soldier who is the only survivor of an ambush on his regiment.  He’s a little insane from the experience, but together, the three of them look for help.  It’s on this trip that she finds she can actually heal with the amulet.  Then she is captured by the Viet Cong but not killed or tortured because she may be a holy woman.

All of this may sound tight, but reading it isn’t.  It’s all described beautifully, but there’s nothing to propel you through the book, nothing driving the plot.  It meanders through Kitty’s experience with no clear direction.  However, I felt like I could really empathize with her.  I guess that means this is a character study.  But even at that, the pacing was rather plodding until she starts healing with the amulet.

As for character development, she’s doesn’t allow herself deep emotions, as that would be too traumatizing.  She always stays a little removed which keeps her sane.  So when she does cry, it’s really intense.  I felt like the other characters were also well done.  I saw almost all of them as real people.  The only two that were a little two dimensional were the lead doctor and the general who finds her in the jungle.  They are narcissistic and abusive and products of racism and sexism.  It was easy to hate them as they treat her with suspicion and disdain.

I give this book four stars out of five.  Under normal circumstances, I’d give this book five stars because my eyes watered at the end.  But the pace was entirely too slow and the plotline doesn’t really start until halfway through the book.  It does make me interested in her other work, however.  I had never heard of this author before, but she has published over forty novels, collaborated with Anne McCaffrey, and written many short stories.  Right now, I feel like I could use one of her comic fantasies to come down off the feeling of despair I have after reading this one.