I was surprised by this book.  It’s yet another Martian epic, this time by one of the masters of hard sci fi.  I didn’t think I’d like it, as I feel Mars-ed out.  But I really liked it, after a fashion.  I hard a hard time staying interested in the first half of the book, but suddenly, I found myself engrossed and involved with the plot.  It’s a very political book, featuring the attempts of Mars colonists to form a central government from the self-ruled family-based syndicates that had developed, a move that threatens the three mega-nations of Earth.  By the end, I realized that what I thought was an excruciatingly slow build-up was necessary to set the scene for the fast-paced second half.  I’m glad I stuck with it.  This book won the Nebula Award for 1994 and was nominated for several others, including the Hugo.  Interestingly enough, it beat Robinson’s Green Mars for the Nebula, but lost to it for the Hugo. 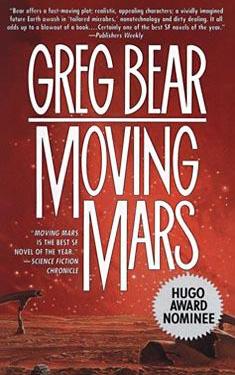 The book is the memoir of Casseia Majumdar.  The book begins with her involvement in a student uprising against the “statists” who want to form a central government and fall under the jurisdiction of Earth.  The statists are expelled.  During the event, she meets Charles Franklin, a brilliant physics student who falls madly in love with her.  When they meet after things on Mars return to normal, they have a brief affair, but she rejects his sudden proposal.  They go their separate ways, Cassie to finish studying political science, Charles to do secret innovative research.  Cassie gets an internship to accompany her third uncle to Earth.  He is acting as an ambassador from Mars despite not having a centralized government.  On the trip, she finds out how menacing the Earth’s mega-nations are.  When she comes back, she becomes part of a new central government movement.  She comes across Charles again, who has discovered a way to communicate and move large objects over vast distances simultaneously.  When the Earth begins making violent overtures, it seems their only hope is (dah dah daaaaaah) moving Mars.

I thought this book was going to be one long tedious space opera, or worse, what I would call court drama in a fantasy novel.  On the contrary, I found it to be quite a smart piece of fiction.  The science is pretty hard, for which Bear is celebrated, but I found it somewhat straight forward to follow.  It enhances the story rather than eclipsing it.  The characters are in the forefront as well, being well-developed.  Even the bad guys get decent development.  I didn’t like Cassie at first.  She’s about twenty when the book begins and comes across as an annoying teenager, joining the anti-statist uprising on a whim.  I didn’t like her treatment of the equally annoying lovelorn Charles.  That’s what made the first half of the book so difficult for me to like.  But as it progressed, they both grew into brilliant, yet fairly normal adults.  By the time they finally meet again, I found I really liked them.

The writing is good, (eventually) well-paced, almost journalistic in style, as one would expect from a memoir.  It’s the dialogue that really fleshes out the characters and builds the world.  This is the third book in a series, but it stands alone and doesn’t rely too much on info dumping to fill you in on how Mars has developed or the state of the politics of Mars and the Earth.  I thought it was all described quite organically.  The ending of the book is also very realistic.  It’s messy, not a hunky-dory tidy ending.

I give this book four stars out of five.  It starts out very slowly, but if you stick with it, I think you'll enjoy it.