I really struggled with my decision of whether or not I liked this book.  It is a very fast, easy read thriller with very simply explained quantum physics.  It’s about a man who is dragged against his will into an alternate universe and when he figures that out, tries to return home.  The beginning was suspenseful.  In the middle, he enters many of the other alternate universes that were created by different decisions in his past, hoping that each door opened to his home universe.  I got pretty bored with that part.   The last quarter of the book picked up with an unexpected twist that I found quite fun.  And the ending was overly sentimental.  So I ended up with mixed feelings about it.  This was a book club in exile read, and I’m sure there’s going to be a plethora of opinions expressed, because, well, I had a plethora of reactions to it, which is a good barometer of the what the discussion will be like. 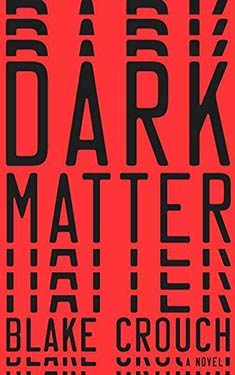 The story begins with Jason Dessen, a college physics professor who gave up his career as a brilliant researcher to have a family.  He’s married to Daniela, a brilliant artist who gave up her career to raise their son Charlie.  One night, Jason is attacked by a masked stranger who injects him with a sedative and another drug.  When he awakes, he finds himself surrounded by people he doesn’t know.  He’s not married and doesn’t have a child.  It takes him a while to figure out he’s in a different universe and his self from this universe, whom he calls Jason2, has swapped places with him.  The device for the interdimensional transport is a large box that Jason2 has developed.  He realizes this is what he would have become if he never married.  But all he thinks about is going home.  Yeah, it kind of has a Wizard of Oz vibe.

The big problem is that the people of Jason2’s universe want to find out the truth as well as protect the secret of the box.  They will go to any length to make this happen.  After an exciting and tragic chase, he gets to the box with the company’s psychoanalyst, Amanda.  The box presents them with an infinite number of doors to alternative universes.  They visit many before they figure out that they have some effect on what’s behind each door, bringing them closer and closer to Jason’s home.

I liked the premise of there being an infinite number of universes based on the choices someone makes.  It reminds me of a short story a friend told me about, whose title I never got, where every choice the main character made created multiple universes based on every possible choice to every action the character took.  It drove that character insane.  Jason, too, questions his sanity as he and Amanda visit all the different universes looking for the correct one.  I found it a little trite, however, that Jason makes his way back home when he’s down to his last vial of the special compound that creates the quantum effect that gets him to the corridor of doors to the parallel universes.  It’s kind of an easy plot device.

The opening of doors to other universes started out interesting, but got tedious as Jason becomes more and more morose over not being able to find his way back home.  The author used many scenarios for the alt-unis:  post-apocalyptic, pandemic, and futuristic to name a few.  But after the first couple, I got bored with them despite the book being a fast read.

I thought the character development was okay, but nothing special.  Even though the book is written in first person present tense, I didn’t really feel like I was in Jason’s head.  I was annoyed by his bad decisions in some of the alt-unis.  There are two female characters, Daniela and Amanda.  Amanda is a little better developed than the Daniela, or most of the other characters for that matter.  She has a pretty level head on her shoulders being a psychoanalyst and has good insight into Jason.  It’s a shame when she leaves Jason, never to reappear in the book.  Her absence is definitely missed in the last quarter of the book.

The prose is fair-to-middlin’.  One of the things that makes it a quick read is that there are a lot of paragraphs that are only one sentence long.  There are no long descriptions and most of the dialogue is rather clipped.  Even the action is simply described.

I give the book three stars out of five.  It’s not great literature. It’s not great pop sci fi.  It’s not even a great thriller really.  The writing style drives you to the end at a breakneck pace.  And that’s what makes the book not too bad.  I really toyed with giving it two stars, but in the final analysis, I was pretty entertained.