There have been a lot of books about colonizing Mars throughout the history of Sci Fi.  This one, published in 1976, has a different approach.  It postulates that to be successful, a human must be modified into a cyborg to thrive on Mars.  What we get is a sort of “Six Million Dollar Man” meets Kafka.  The majority of the story is about the development of the cyborg.  Only a small part of the end actually has him on Mars.  It makes for a plodding, but interesting, and at times intense novel.  It’s not as action-packed as Pohl’s Hugo winning Gateway.  It’s a much more cerebral experience, questioning what it means to be human and a man.  This book won the Nebula for 1976 and was nominated for several other awards. 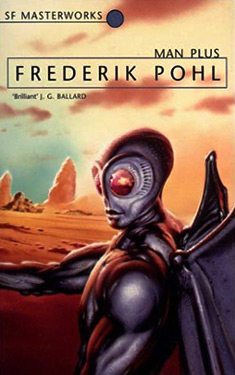 Earth has become a mess with food shortages, climate problems, international hostilities, and the threat of global nuclear war.  It is believed that the only thing to save us is the colonization of Mars.  The U.S. experiments with enhancing a human by replacing body parts, including the skin, with cybernetics.  The result is a demonic looking cyborg that can survive Mars’ harsh elements without a space suit.  The first volunteer has a deadly stroke.  Next on the list is Roger Torraway.  The book goes through the process of replacing his parts and its effects on Roger, physically, mentally, and emotionally.  It strains his relationship with his wife.  But eventually, the transformation succeeds and he goes to Mars.

Roger is an all-round nice fellow.  He’s an astronaut and the hero of a mission to rescue a group of cosmonauts several years earlier.  His character is pretty decent, but I never quite got in his head.  I could never quite relate to his original nice-guy personality and his transformation into the morose monster he becomes.  This is where the Kafka reference applies.  I have never read “Metamorphosis”, but I am familiar with the basic gist.  Roger doesn’t adjust to his new self until he gets to Mars.  I found this hard to deal with.  I’m not saying he shouldn’t have had mental and emotional problems with the transition, but his existential angst dragged on way too long in my opinion.

I had a much better time with Father Don Kayman, a Jesuit priest and a brilliant scientist whose specialty is the study of Mars.  The rule of celibacy has been lifted for priests, and he’s having an affair with a nun.  He struggles with this relationship.  He provides psychological and spiritual (not religious) support to Roger.  This made him very human and very easy to relate to.

The female characters are very much ‘70s Sci Fi women.  Dorrie is his wife who he supports in her pottery hobby.  Suelie Carpenter is one of his nurses.  Both are surprisingly three dimensional, though they are both relegated to being there for Roger’s pleasure, and pain.  There is one amusing scene where Dorrie is interviewed by Fem magazine where the feminist interviewer grills her on how she’s going to self-actualize while her husband is on the way to Mars.  It was really the only point where there was some modern aspect for a female character, but I think it was meant to be humorous, which I found sad.  There is more to the plotlines of Dorrie and Suelie, but to reveal them would be spoilers.

The writing was kind of strange.  The story is told in third person by an unnamed “we”.  It’s only revealed in the last chapter who “we” are.  The prose is pretty good, although sometimes, it felt like it was a lot of “tell me” rather than “show me” what’s happening and a fair amount of info dumping.  This made it occasionally slow and plodding, only picking up when there was actual dialogue.

I give this book four stars out of five.  Even though I thought the pacing was way too slow, it did make me think a lot.  The premise was original, extrapolating the “Six Million Dollar Man” concept to a cyborg thriving on Mars.  And it was way different than any other Mars novel I’ve come across.  The Kafkaesque metamorphosis was nice touch, even though the angst got to me.  This was not a light read, but upon reflection, I did enjoy it in an existential way.