This book was a surprise to me.  I had read several short stories by Pohl and didn’t care for them.  Gateway had me almost from the get-go.  I loved the construction of the novel:  narration of the main plot, alternating with therapy sessions, interspersed with technical reports and classifieds.  The reports and classified added a flavoring to the novel.  They were not directly tied with the plot, but added to the feel of living on the planet as a prospector. 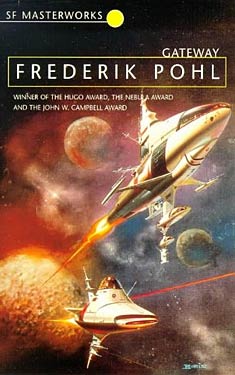 The main character was brash, arrogant, and immature.  I can’t say he grows through the novel, but we get to understand why he is the way he is, and what holds him back from growing.  Sometimes the therapy sessions are a little annoying, because that’s where you see his immaturity quite bluntly.  But they are necessary in getting him to a resolution.

The concept of the gateway is really interesting.  I really liked the idea of using alien technology as much as is understood, and having occasional fatal repercussions because of the lack of full knowledge of how the technology works.  It’s an interesting twist, an one of the earliest concepts of reverse engineering which I’ve encountered.  It also explores the concept of a community of people dealing with a high risk profession.  I could particularly relate to the main character’s fear of risk.

I gave this book 4 stars because I was so quickly engrossed in the plot, the characters, the concepts, and the irony.  I more or less saw the ending coming, but was pleased by how it unfolded.
Posted by Stephen P at 10:46 AM