Hooray!  I liked this conclusion to the Wormwood Trilogy.  I was worried because I did not like The Rosewater Insurrection at all.  This book made a lot more sense, having only two narratives, one being first person narration by Bicycle Girl from the first book, Rosewater, and one being a third person, relatively straight-forward narration by her of the main plot.  Yes, perspective bounced among the main characters, but for the most part, everything followed linearly.  It was not nearly as messy as the second book.  There was also a lot less politicking and more directed action. 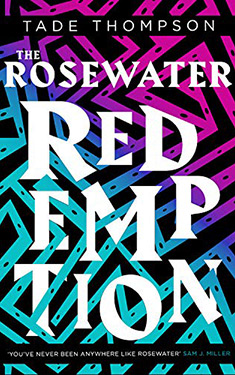 This book takes place after the insurrection of the second book.  The mayor, Jack Jacques, seems to be losing control of the new city-state government of Rosewood.  He is still under many threats from the Nigerian government and internally.  Koriko, formerly Alyssa and the present avatar of Wormwood, has attained a god-like status among the Rosewater residents as she resurrects the dead.  However, it comes to be known that the walking dead are really the aliens being incarnated in human bodies.  There is a moon full of their dormant minds stored as data waiting to be placed in dead humans.  Koriko wants to accelerate the takeover of human bodies, as opposed to the former avatar, Anthony, who was gaining the trust of humankind and approaching the takeover slowly.  Bicycle Girl, whose real name is Oyin Da goes time-traveling to figure out how to defeat the aliens.  She also navigates the xenosphere as does Kaaro, the sensitive from the first book.  It’s pretty clear now that the aliens are dangerous and all efforts are now geared to killing them or at least getting them off of Earth.

There isn’t much character development in this book, as the characters were pretty well described by the second book.  Everyone acts as expected.  I still liked Lora, though she doesn’t have as large as a role in this book.  Kaaro had a larger role and I got into his character about as well as in the first book.  Layi, the fire guy from the first book makes a major comeback in this book, coming out as gay and wanting to march in the first Rosewater Pride march.  Consisting of only twelve people, it’s more symbolic as the names of all the queer people who have been imprisoned or been executed at the hands of the Nigerian government are going to read over a loudspeaker during the parade.  They plan this parade even while the city of Rosewater is falling apart around them.  It’s one of the few positive things that happens amidst the chaos of the battle against the aliens.

I don’t have too much more to say about the book, besides praise for it being so much less messy than Insurrection.  The writing felt a little tighter, probably because the world is pretty much built and the characters developed at this point.  I give the book four stars out of five.  It was exciting and paced well.  The end was a little derivative of a lame trope, but it had a twist that made it believable.  Overall, I’d give the trilogy three and half stars.