I really needed this book.  I was in a pretty bummed out space after the last book I read; it was so depressing.  This book was silly and just what I needed.  I thought it was much better than the first book, The Color of Magic.  Even though I read Color five years ago and it ended on a cliffhanger which I don’t remember, I was able to pick this book up with no problem.  It spends a little time catching the reader up on Discworld and then drops you into the crazy plot. 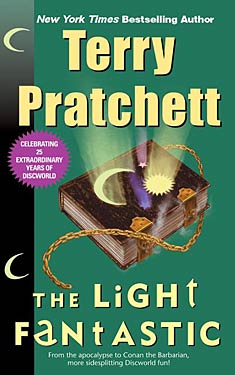 The plot is pretty simple.  There is a star that’s on a collision course with Discworld.  To avert disaster, eight spells must be said at the same time by eight different wizards.  The eighth spell isn’t in the Octavo, the book of spells.  It has been transferred and seared into the mind of our main character Rincewind, the failed wizard.  He doesn’t know why he has the spell, but he knows he’s being pursued rather violently by the other one of the other wizards, Trymon.  All Rincewind wants to do is get home.  He’s still accompanied by Twoflower, who’s a tourist, and a piece of luggage known as Luggage which has a mind of its own and runs on hundreds of little legs.  They keep getting into deadly scrapes as Rincewind discovers the purpose of the spell and figures out what he has to do with it.

Even though it’s been five years, I picked up on the personalities of the characters pretty quickly.  Rincewind is a sarcastic guy, tired of all the dangerous situations they keep getting into since he met Twoflower.   Twoflower is oblivious to sarcasm and has his own rose-colored view of every situation they get into.  Much of the humor is derived from their relationship and interactions.  Along the way, they pick up Cohen the Barbarian, who is very old and not the big, muscular hero he once was.  They also meet Bethan, a seventeen-year-old virgin who was about to be sacrificed by the Druids.  Both add comedy to the already amusing situation.

The prose is pretty good.  It’s filled with simple jokes, bad jokes, complex jokes.  I know I missed some of them, but in general, I think I caught most of them.  You can see why Pratchett is revered alongside the likes of Douglas Adams and Carl Hiaasen.  I think the humor is little less British than Adams and can be appreciated by a wider audience.

I give this book four stars out of five.  It was the right book at the right time.  It kept me smiling and even made me chuckle out loud a couple of times.  This isn’t great literature, but it’s a great time.  I look forward to the other six Discworld books I’ve gotten over the past few years.