Beneath the Sugar Sky

This is the third in the “Wayward Children” series.  It’s another terrific novella, this time following the improbable story of a young girl from a different fantasy world coming to the Home for Wayward Children to look for her mother.  The fantasy world is called Confection and it is comprised of sweet treats, like gingerbread houses, graham cracker sand, and candy corn stalks.  The ocean is strawberry rhubarb soda.  It sounds kidified, but it is as dark as the previous two novellas.  The prose and world-building are once again tremendous.  The character development is also strong as it fills in some gaps of the main characters from the first book.  This is another multiple award nominee in the novella category. 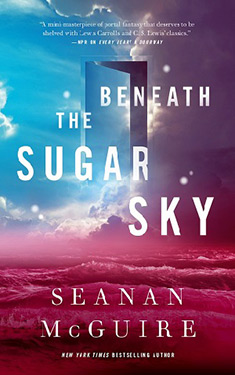 The majority of this book is told from Cora’s point of view.  She’s a new student at Eleanor West’s Home.  Her journey to a fantasy world was as a mermaid.  In our world, she struggles with peer acceptance and bullying because of her weight.  At the school, she actually makes a friend, Nadya, another student who visited a water-based world.  While playing around at Turtle Pond, a young girl appears out of nowhere and falls into the pond.  Her name is Rini.  They bring her back to Eleanor where they find out that her mother is Simi, who was killed in the first book.  Rini is trying to find her mother to prevent herself from fading out of existence and save the world of Confection.  So Kade, Christopher, Cora and Nadya accompany Rini and Simi’s skeleton back to Confection to try to bring Simi back to life and correct the twisted timeline.

I was pretty happy to go back to Miss West’s Home because it gave me a chance to get to know the main characters from the first book a little better.  While the POV is mostly from Cora, it tells more backstory on Kade, Christopher, and Nadya.  We also get to visit Nancy in her own Fae world.  I liked the characters much more on this second visit to the Home.  They are all a little broken and strong at the same time.  Even though I didn’t connect with them well in the first book, they were like old friends in this one.

The world of Confection is simply marvelous.  It’s a Nonsense world, so logic doesn’t hold too well within it.  Everything is made of candy or baked goods, including armor and clothing, and no one dies from vitamin or nutrient deficiencies.  The world was created by a god who came to the world and began baking it into existence.  Our little fellowship must find the Baker and ask for help in restoring Simi to life so that Rini doesn’t fade away and the Queen of Cakes can be overthrown.

I give this book four stars out of five.  I really enjoyed it and can’t wait to see what McGuire reveals to us in this massive universe of fae and fantasy.