I read a kid-ified version of the Odyssey around 4th or 5th grade and I became hooked on mythology.  I don’t remember if I ever read the Odyssey itself, but I did remember Circe turning Odysseus’ men into pigs.  This book is a retelling of the Odyssey through Circe’s eyes, from her birth to the Titan Helios, to her development as a witch, to her exile on the island that Odysseus visits on his ill-fated journey.  Like Miller’s first novel, The Song of Achilles, it’s a terrific book.  There’s so much more than the basic story of Odysseus, drawing from other sources for Circe and building on that with wonderful prose and world-building.  This book won The Kitchies: Red Tentacle Award for 2018 and was nominated for several others. 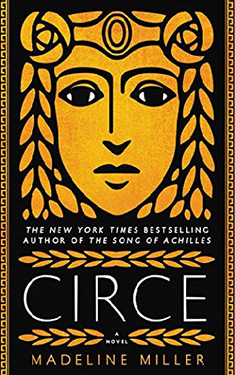 The story is told in first person by Circe.  She begins with her childhood, where she’s made fun of by her parents and siblings for being ugly, having a terrible voice, and being basically an embarrassment to divinity.  Her self-esteem is terrible, needless to say, and she’s very naïve.  Eventually, she discovers that she can perform magic.  She uses it when she is challenged by another naiad for her love interest.  After turning her into a hideous monster, Zeus exiles her to a remote island.  While continuing to work on her magic abilities, her path crosses with Hermes, the Minotaur, Jason of the Argonauts fame, and Odysseus.

Circe is a multi-dimensional character who despite being the child of a Titan, has little understanding of how to act as a goddess.  She’s makes naïve and generally well-intentioned choices which backfire with terrible consequences.  It was frustrating to watch her develop from awkward child to awkward teen to lonely exile.  It wasn’t until she started turning men into pigs that she started to take care of herself, and even then, she has a tough time coming into her own personhood.  Things become more interesting when Odysseus shows up.  He relates the stories of the Trojan War and his travels afterwards, though not all at once in a big info dump.  It comes out as their relationship develops.  It was good to see Circe finally have something nice in her life even though we know from the source material that it must end.

Probably the most interesting thing about the book is how the Titans and Olympian gods are all basically very shallow and petty.  We normally think of them as being great and powerful, which they are, but they are worse than humans in their jealousies and rages.  I guess I hadn’t really thought about them for quite a while, but it makes sense thinking back on all the mythology I’ve been exposed to.  Thinking about this now, it makes me very interested in Stephen Fry’s mythology duology which I picked up cheap but have not read yet.  That will probably come later this year.

I give this book four stars out of five.  I thoroughly enjoyed reading it, despite Circe being bullied and abused by her kin.  She does experience some self-actualization at the end in a surprising way, making for a very satisfying conclusion.  How she gets there is very dramatic and worth the read.