Every Heart a Doorway

This is the first novella of the Wayward Children series.  It’s about a home for children who have returned from Faerie to unbelieving parents and heavy despair.  It’s not the typical magic school trope.  Rather, it’s a fresher take on it.  Still I wasn’t able to quite get into it.  Being a novella and only about 170 pages, I think its quick dive into the plot left me unable to really sink my teeth in the characters and immerse myself in the eventual murder mystery plot.  I found myself not really caring that much about anyone.  Nonetheless, this book won the Hugo and Nebula Awards for Best Novella a few years back, among others. 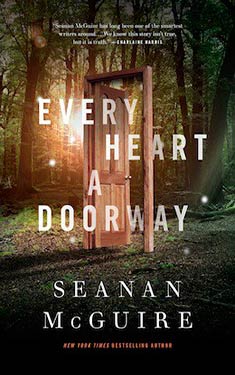 The book begins with the arrival of Nancy at the facility.  She’s just come back from the land of the dead, and like every other child who has found a doorway into the realm of Faerie and returned, she longs to go back.  No one understands her now.  She doesn’t even consider it home anymore.  As a last resort, her parents bring her to Eleanor West’s facility in hopes of getting their old daughter back.  The reality is the facility doesn’t exactly change the children.  It helps them accept that they might not go back.  Shortly after her arrival, her roommate is murdered.  Everyone initially blames her because as the newest student, she’s the obvious suspect.  But then another child is murdered and accusations fly all over the place.  Nancy bands with a few other students to try to figure out who the murderer is.

The group of students Nancy meets are quite unique in their experiences of the realm of Faerie.  There’s Kade, a girl who returned as a boy; Jack and Jill, twin sisters who went through a doorway together; and Simi, Nancy’s roommate who is quite nonsensical.  The children range in ages, with Nancy and a few others being around 16 or 17-years-old, and they are all angsty because they want to go back to Faerie and believe they can.  They are the type of characters I should have at least been able to empathize with.  But instead, I found myself keeping my distance from them.  Perhaps it’s because Nancy, as the main character, was keeping her distance as well.  Nancy herself is asexual, though not necessarily aromantic.  She actually falls for Kade who is trans.  But in general, she does not really open up to the other students, nor does she let them get too close to her.

The world-building however is quite excellent.  I found it interesting that McGuire chose to have each student discover and return from their own experiences of Faerie.  Some realms are logical, some nonsensical, some dark, some dangerous.  Of course time in Faerie doesn’t match time in the real world, some of the students had been gone for years, but came back six months later by our time.  The one common theme is that they all want to go back, and believe that they can if they can just find the doorway again.  They’ve all been changed by their experiences and no one believes where they’ve been.

The murder mystery aspect of the book is interesting in that it does a lot to flesh out the characters revealing more about them and the what they experienced in their realms.  And I was surprised when the murderer is revealed.  That may be because I found myself disassociated with the characters so I didn’t see it coming.  Nonetheless, I thought it wasn’t badly done.

I give this book three stars out of five, which is a good in my book.  I was just expecting something better.  I like McGuire’s prose, and it’s actually quite beautiful.  It’s the lack of empathy for the characters that dragged this book down from a four-star rating.  I’ve already started the next book in the series, and find it leaps and bounds better than this one.  We’ll see how it holds up.