This was one powerful book.  It drops you in a terrible situation and doesn’t let up until the end.  I found myself equally drawn to and devastated by it.  It’s about a contemporary black woman who goes back in time to slavery days at the whim of the white, slave-owning man who is her several times great-grandfather.  Imagine being a modern person going back to being a slave in the early 1800s.  It’s tough for the character and tough to read.  This book is considered one of Butler’s best.  I’ve liked many of her books, including Wild Seed, Fledgling, and Imago, and gave five stars to the Parable books:  Parable of the Sower and Parable of the Talents.  But I’d have to say that this one left me the most emotionally wrecked. 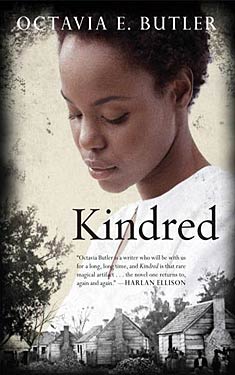 The story begins in 1976.  Dana Franklin, newly married to her husband Kevin, feels dizzy and blacks out.  She comes to at a river where a small white boy named Rufus Weylin is drowning.  She saves him, resuscitates him, and comes under the wrath of his parents.  She travels back to the present when his father aims a gun at her.  In the present, she was only gone a few seconds.  A little later, she travels back to the past again when Rufus, a few years older, lights the curtains on fire.  She comes to understand that seems to go back in time whenever Rufus’ life is in danger.  She stays in the past for varying lengths of time, though it’s only minutes or hours in the present, hiding out as one of the Weylin family’s slaves.  Each time she goes back, it’s more difficult on her and more dangerous to her life.  She comes to realize that her time travel has to do with making sure that Rufus stays alive so that he can father the daughter that will become her great-great-grandmother.

The story is told in first person by Dana.  She’s a phenomenal character, but all of the other characters are also well done.  The slave-owning Weylins are terrible, but they’re still people and Butler gives them some humanity despite their extreme racism and sexism.  Rufus is not very likeable as he grows from ignorant child to mean adult, but he’s very developed, and the cognitive dissonance he experiences is very well done.  Alice, who is Dana’s several times great-grandmother, is also phenomenal as the freeborn black woman who ends up a slave because of Rufus’ insane desire for her.

The story is so very hard to read as there are rapes, severe beatings, and slave sales that destroy families.  And yet, it’s not as graphic or as terrible as some deeper south treatment.  This part of the story takes place in Maryland which is not as bad as some places the slaves could be sold to.  Dana is lucky though.  Because she has made Rufus to understand that she comes from the future to keep him alive, he treats her more or less with kid gloves.  Still, she becomes enraged at the injustices she sees around her.

I give this book five stars out of five because of the emotional impact it had on me.  As difficult as it is to read, I had a hard time putting it down.  But I also had a hard time picking it back up again because I didn’t want to face the reality of the past.  I’m so glad I finished it though.  It’s a powerful book.  It’s well crafted in just about every aspect:  plot, characters, and form.  If someone asked me to pick an Octavia Butler book to start with, I’d say this is the one.  I’ve now read every novel by her and I think this is her best.