This is my first story by Adrian Tchaikovsky.  It’s a fantasy novella which blends magic, thievery, and homunculi into a fast paced tale with a few twists and turns.  What’s nice about novellas is that they get to the meat of the story pretty quickly.  At just under two hundred pages, I didn’t feel like any word was wasted.  The prose is marvelous and yet is very tight.  And the world-building is surprisingly robust.  I have two full-sized novels of Tchaikovsky’s in my TBR pile and now I’m looking forward to getting to them based on how much I enjoyed this book. 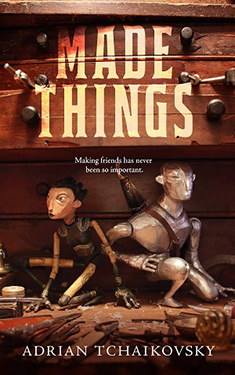 The story follows Coppelia, a seventeen-year-old street performer, thief, and wielder of some magic.  She has befriended several small puppet-like human-like beings, aka mannikins or homunculi, made out of various materials like wood, paper, metal, and fabric.  They were created by a mage but escaped and came to have a working relationship with Coppelia.  She does puppet shows while the homunculi pick the pockets of the audience.  She is a gifted puppet-maker and creates new homunculi using her wood carving and magic skills (though I never quite got how this was accomplished).

Coppelia catches the attention of one of the crime lords vying for dominance in the city.  He enlists her to help him and a large team of thieves break into the city mages’ palace where a golem has been seen in a workshop strewn with valuable metals and gems.  This adventure ends tragically, but opens Coppelia up to a secret that can bring down the existing political structure of the city.

The characterization is pretty good.  Coppelia is somewhat shy and not too brash for a petty thief.  She mostly keeps to herself and her miniature friends.  She’s always trying to stay out of the way of a few vicious policeman, known as Broadcaps.  Two of the homunculi, Tef and Arc, are interesting.  One is made of wood and the other of metal.  They are the closest to Coppelia and try to save her in the aftermath of the failed palace robbery attempts.  They have distinct personalities, as do the other more minor mannikins.  I was surprised at how well they were all depicted.  It was a little tough to remember they were only about six inches tall when their personalities were so grand.

What really makes this book shine is the narration.  You can almost hear it being read to you.  The prose is lush without being arrogant.  The world-building of the city Lorentz and its magic, mages, trinkets, and other sights and smells is tremendous.  I felt very immersed in it despite the book being as short as it was.

I give this book four stars out of five.  It has made me more open to reading other books by the author.  I was nervous about them because the two I have are very long.  But now I’m less afraid of tackling them if the prose is as wonderful as this book’s is.  It makes me wonder why I waited so long to read this prolific multi-genre author.