Beowulf: A Translation and Commentary

When I decided to undertake Tolkien’s Beowulf, I was excited.  It’s advertised as a prose translation of the original Old English text.  I thought it would be an easily readable book.  Ha! this was no such thing.  This form of the prose is very antiquated.  The word choices are complex as is the sentence structure.  It was reminiscent of the Tolkien’s The Story of Kullervo, another work based on an ancient text.  I found that book difficult to read as well.  But Beowulf was far more complex.  There were many times I could not follow what was going because the sentences were so complicated.  However, my experience of the book was saved by an additional text that was included called the Sellic Spell, which was Tolkien’s attempt at what might have been an old folk tale that would have predated the Beowulf legend. 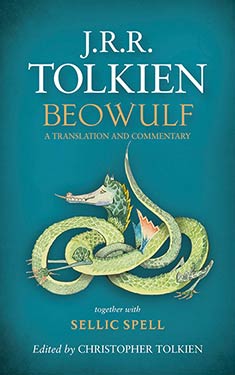 The main part of Beowulf is the story of his killing of the ogre Grendel and his ogress mother.  It then proceeds to the dragon part of the tale.  The story is followed by a massive commentary of the translation based on Tolkien’s lectures at Oxford.  Next comes the Sellic Spell.  The final version is given in full, followed by differences from his original text.  Next is a surprising inclusion, an Old English translation of the Sellic Spell.  That’s not something that’s readable, but you know that Tolkien had a blast translating it.  The book concludes with two poems or “lays” of Beowulf written in typical Tolkien style.

I have to say I gave the Beowulf part of this book my best shot, but I was exhausted from trying to read and understand it.  When I came to the commentary, I skimmed through most of it, only deeply reading bits here and there that caught my eye.  As you would expect, the commentary is quite academic and not easy reading in itself.  It’s really something that should be studied.  Despite my intense joy in reading the twelve volume History of Middle Earth series, which was also very academic, this was much tougher, probably because I’m not as familiar with the Beowulf saga as I could be.  However, the parts of the commentary I did read closely were very interesting.

On the other hand I really enjoyed Sellic Spell.  It was written in much more typical Tolkien folksy style, which is what I think he does best.  The word choices and the sentence structure are much more modern and much easier reading.  The lays were also fun, being typical Tolkien poetry with some alliteration found throughout them.

I struggled with giving this book a rating.  My first thought was to give it three stars, but that doesn’t do justice to the grandness of the commentaries, the marvel of the Spell, and the joy of the lays.  I just wish the prose Beowulf was in a less abstruse form.  So I settled on four stars out of five.  As always, these academic books are not for everyone.  In this case, it wasn’t even really for me.  And I even think it’s not necessarily for every lover of Beowulf.  However, it made me think that I need to read the Seamus Heaney verse translation, which I believe is the classic and beloved version.