This is the second book in the Kingston Cycle.  The first was Witchmark which I read last September.  While it wasn’t that long ago, I had forgotten many of the details.  Fortunately, this book tells you about what happened in the last one, and does so throughout the story without a lot of into dump.  I found this book a little tougher to get into than the first one.  It didn’t grab me as quickly in the beginning, but nonetheless proved to be quite a page turner after all.  It followed Witchmark’s main character’s sister as she becomes Chancellor finds herself in a convoluted mess of politics. 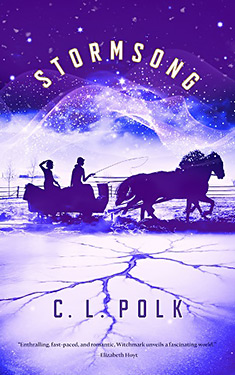 As with all series, the plot summary of this one has spoilers of the previous book, so be forewarned.

With the evil power grid of the Aeland destroyed, the country must face the consequences.  Winter is coming, people are cold and out of work, and the souls of the dead are roaming the streets.  Grace Hensley is a weather mage and daughter of the former, now imprisoned, Chancellor to the Queen.  In fact, the whole cabinet, powerful mages known as the First Ring, is imprisoned for their crimes from the last book.  A storm has just destroyed the last of the harvest and now a monster storm approaches.  Grace together with the Second Ring of mages hold off as much of the monster storm as they can, but it still drops three feet on the countryside.  For this and her dedication to the throne, the Queen makes her Chancellor.  Now as the voice of the throne, she tries to do her job, protect Aeland from the weather, deal with the Amaranthines who have come from Solace to hold Aeland accountable for its war crimes, and try to overturn the witch oppression laws.  And there’s a murder mystery in the middle of it was well.

There’s a lot of politics in this book.  It put me off in the beginning as the first hundred pages is the setup for it all.  It’s a slow burn and a little dry.  And I was disappointed that Miles, the main character from the first book, wasn’t the main character here.  But Grace proved to be just as appealing.  She was born to succeed her father as Chancellor and it shows.  She has a good, strong head on her shoulders, but doesn’t know exactly who she really is.  This causes her to doubt herself and her decisions.  The book is her journey of self-discovery as she deals with the chaos that is Aeland.  Miles does appear in the book as a secondary character, as does his partner Tristan.  But this is Grace’s story.  And she does get to have a love interest, Avia, a photojournalist who is trying to figure out the connection between the power grid, the invasion of the spirits, the witches, and the Amaranthines.

I liked this book a lot, but not as much as I loved the first book.  As I noted, the beginning was tough for me.  I also thought the romance between Grace and Avia was not done as well as Miles and Tristan’s in the first book.  It didn’t feel like an integral part of the main story, which was the politics.  There are some pretty awesome scenes though, my favorite being when Avia shows up at the New Year’s Eve ball in a suit rather than a gown and dances with Grace.

I give this book four stars out of five.  I really liked the last two thirds of it, having a tough time putting the book down for simple things like eating and going to the bathroom.  The ending wraps some things up, but has more of a cliffhanger ending than the first book.  I didn’t mind though because I have the third book and will be reading it very soon instead of waiting eight months.