This is probably the first time I didn’t really care for something written by Simak.  I found it to be really strange and hard to follow.  The basic premise was okay.  It’s about an odd assortment of people traveling to a planet that locks them in a tractor beam, lands them, and then seals their spaceship shut so they’re forced to stay on the planet forever.  There were robots and weird aliens, as in most of his works.  But I found the prose to be rambling and too esoteric, and the characters not all together likeable.  It made for a less than enjoyable read. 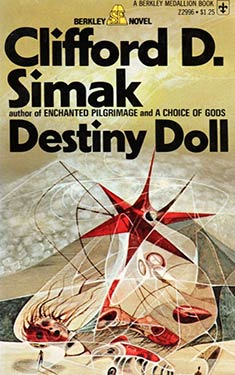 Captain Mike Ross is hired by Sara Foster to travel to a distant planet in search of a being which has been communicating with the blind George Smith.  They are accompanied by a man known as Friar Tuck who wears a friar’s robes and helps George get around.  They are shocked when they get to the planet and are pulled in and forced to land.  When they leave the ship, they are told they must get everything out of it and go into a parallel world to escape the planetary tremors which are going to follow.  When they leave the ship, it gets sealed, as are all the other ships which have landed on this planet.  They are sent a desert world where they meet an alien they name Hoot who bonds with Mike.  They make it back to the main world and begin a quest to find the elusive Mr. Knight and his robot, Roscoe.  Along the way they find, killer trees, centaurs, and a wooden doll which seems to help people meet their destinies.

The characterization isn’t all that bad.  It’s just that the narrator, Mike, is not a nice person.  He does a lot of mocking and yelling at people.  He’s not likeable at all, which I think is a big reason it’s tough to read this book.  He does a lot of describing of the planet on their journey, but I didn’t connect with any of it because I couldn’t really connect with Mike.  Sara seems like a nice person.  She’s wealthy, compassionate, and insightful, but she’s also a big game hunter (a theme which appears in Mastodonia as well).  So that’s an element that’s a little off-putting to her character.  But her positive attributes do make it through Mike’s rather arrogant narration.  The other two characters, George and Tuck are just pathetic through Mike’s eyes.  He never really gets to know them, so neither do we.

The one character I really liked was Hoot, the alien.  He was an enigma.  We don’t really know what he is, but he has many powers that are helpful to our band of four.  I like Simak’s aliens in general.  The are always non-traditional and non-humanoid.  Hoot had a cylinder like body with lots of feet and tentacles coming out of one end.  He spoke a broken English that was endearing.  He alone was able to get through Mike’s tough and reactionary shell and talk sense to him.

There are also hobby-horse-like mechanical things that our group calls hobbies.  The hobbies insist that they are not robots and we never really learn their nature.  One hobby named Paint becomes part of our crew and helps them at various parts of their journey.

I thought the prose was very hard to follow.  It often felt like Mike was rambling, which implies that Simak was going off on long diatribes to do his world-building.  It mostly felt like “tell me” instead of “show me”.  It gave the book a ‘50s pulp novel feel with the author getting paid by the word.  I found this disappointing.

I give this book two stars out of five.  There is a wide variety of reviews on this book, some where the reviewer says this is their favorite Simak book and others like me who were just lost and/or disappointed in the execution.  This was a short book, but I only was able to get through about fifty pages a day, much slower than I usually read.  I’d say if you want to read some Simak, start with any number of others, like Way Station, Shakespeare’s Planet, or A Choice of Gods.  Leave this one for a time when you find the book cheap at used book store.