“Uprooted” is a marvelous twist on the tales of the magic forest.  There are good forests and bad forests.  Here, it’s The Wood that harbors evil, is full of monsters, and seems to have a malevolent spirit all its own.  The only power that protects the townspeople from this evil is the wizard known as the Dragon.  In exchange for his protection, he takes one young woman from the town every ten years.  “Uprooted” is the story of one such woman, Agnieszka, and her journey of coming into herself and her own powers.  It’s full of action and suspense and is a fun read. 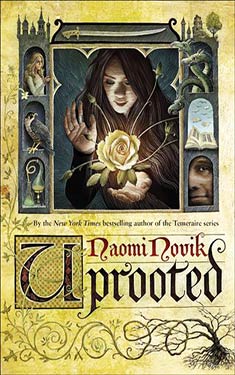 The story is told from the first person perspective of Agnieszka.  Being the narrator, her character is the best developed.  She’s young, naïve, and stubborn.  She first thinks she’s the captive of the Dragon, but slowly realizes she’s his apprentice, that she was chosen because of her budding magical abilities which even she didn’t know she had.  As she develops, she realizes she has a much more organic approach to magic, as opposed to the more academic style of the Dragon.  It makes for tense and sometimes humorous moments with him.

I’ve read some reviews that claim that Agnieszka is a Mary Sue.  As I read through the criticisms and the descriptions of what a Mary Sue is, I can see that somewhat.  A Mary Sue is a young or low-rank person who saves the day with unrealistic abilities (thanks Wikipedia).  But I think Agnieszka is a little more complex than that.  She’s not the pretty little ingénue.  In fact, her best friend is, but the story revolves around Agnieszka anyway.  She struggles with everything and everyone around her, and she’s not always right.

Besides the fact that this book is the July selection for my book club, what drew me to it was that the author’s inspiration was Polish fairy tales and the Baba Yaga myth.  Soooo, I don’t know any Polish tales, but I am a little familiar with Baba Yaga.  She appears in the form of a journal of magic spells that Agnieszka finds.  And the story basically takes place in a variant of and the characters all have Polish names.  The one thing that perturbed me a little, though, was that sometimes the author transliterated the characters' names, like using the letter V, which is a W in Polish, or using Stashek instead of Stasiek or Staszek (the diminutive for ).  Well, you can’t have everything.

A special mention needs to be made of the Wood.  The author imagined quite a wondrously malevolent forest that is not just full of evil things, but is evil itself.  It is basically a character unto itself.  I haven’t read anything else by Novik, but I think it speaks to her world-building ability.

I give the book four stars out of five.  It’s a well-written fantasy with a strong heroine in an imaginative universe.  It’s a lot of fun and some of the sequences were intense page turners.  The only reason I did not give it five stars was because I thought it lost a little steam in the end.  It was complicated, almost esoteric.  But in all honesty, I had several things come up in my personal life with less than fifty pages to go which made it difficult for me to concentrate on the ending.  I had to read it twice to make sure I understood it, and I lost my emotional involvement with it.  It was still well worth the read and I look forward to the discussion of it in book club.
Posted by Stephen P at 11:51 AM