Most people recognize heart-shaped boxes from candy packaging.  In this book, the box is big and contains the suit of a dead man, and his ghost.  Judas Coyne buys this suit because he collects souvenirs of the macabre.  What could be more tantalizing than buying a ghost?  Unfortunately, the ghost is real and wants to murder Jude and anyone who tries to help him.  Although I had trouble with the first third of the story, the suspense stayed tight throughout the rest and had a pretty pleasing horror novel experience. 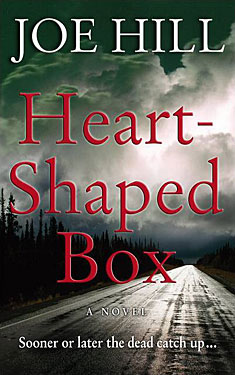 Don’t let the name of the main character make you groan.  Judas Coyne is a death metal rock star who changed his name to cut himself off from his past.  He left his real name behind to disassociate himself from his abusive father.  Since his divorce, he’s had a string of young girlfriends, even though he’s now 54 years old.  Despite the predilection towards younger women and things macabre, he is actually a decent character, much more relatable than I thought he’d be.

I should explain my comment about the first third of the book.  I was initially turned off by the book because a lot happens in the beginning, including the appearance of the ghost.  This made it seem that Hill was playing all his cards up front in the first section, pulling out all the stops.  When the first section was done, I couldn’t figure out how he could keep the story at such a high level of suspense for the rest of the book.  Fortunately, he didn’t have to.  The plot after the revelation of the ghost kept my interest.  This was a surprise because I didn’t feel like his writing was that strong.  And it really isn’t that great, but it was good enough to keep me reading.

Despite the adequate prose, I have to say that Hill was very good at describing the creepy supernatural stuff that occurs towards the end of the book.  No spoilers here.  I just wanted to note that it was good, strong imagery.  It would be easily translatable into  good special effects in a movie.

I give the book three stars out of five.  It’s a decent horror novel with enough creepiness to give me the willies, particularly in that first third.  I should note too that Joe Hill is Stephen King’s son.  It’s been a long time since I’ve read any King, but I felt that Hill was writing with his own style, not trying to emulate his father, or at least not emulating how King wrote up through the mid-nineties.  I don’t know if Hill will attain a level of stardom like his father, but he’s a good enough story teller that I’m interested in reading more of him.
Posted by Stephen P at 12:39 PM