The Tower of Swallows

This is the fourth book of the Witcher Saga, and the seventh book of the Witcher series.  Unlike the other books, the prose and form of this book are wondrous.  It felt like Sapkowski finally honed his writing ability and came up with a much more mature storytelling style.  It created a tone that is much more serious and less straight-forward swashbuckling adventure, lending a gravity to the plot which wasn’t as evident in the previous books. 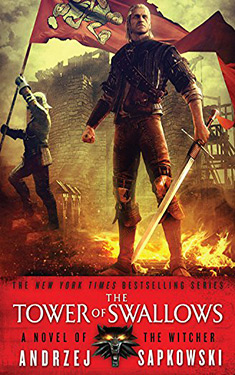 The form that Sapkowski uses is to have multiple narrators telling the story.  The perspective changes depending on the narrator.  But the narration isn’t told in big blocks.  It bounces back and forth between the perspectives to pull all the different emotions and tensions out of the story.  It doesn’t rely on a single third person omniscient thread.  Rather it makes a linear story out of multiple threads.  The result is a much more powerfully developed universe that the previous books only hinted at.  One could argue that the universe of the Witcher was already well developed by the scope of the saga.  However, I feel that this book fleshed it out in a piece of fine literature.

Be aware that giving a plot summary here is a spoiler if you haven’t read the previous novels.  As usual, I’ll keep it brief so that it doesn’t give away too much.

The story continues with the Witcher searching for his ward, the apprentice witcher/sorceress Ciri.  Up to this point, she has been escaping capture by the hordes of bad guys who have been after her.  In this installment, she finally succumbs to a powerful bounty hunter.  The main plot of this book is the telling of how she gets captured and plight after that, while the witcher and his company traverse dangerous roads in their search for her.

The story is also much more adult, in that Ciri has a relationship with another young woman in the ragtag group of outlaws she had fallen in with in the last book.  It’s handled really well, not going into a lot of detail, but allowing it to have a profound affect on her.  This makes up for Sapkowski’s use of the word “sodomites” which made me bristle when he plopped it into the first book.

I again give this book four out of five stars.  This time, it’s not because it’s as fun to read.  It’s not.  It’s because it is much more serious in tone and mature in style.  It should be noted that this book has a different translator which may have had an influence on the word and phrase choices.  Overall, I feel this is the strongest of the books, except perhaps for the “The Last Wish” which introduced the Witcher in a series of short stories.
Posted by Stephen P at 10:45 AM