Nalo Hopkinson is fast becoming one of my favorite writers.  I’ve only read one other book of hers, “Brown Girl in the Ring”, but that was a fantastic book.  This one is also good, and large in scope considering it’s a rather short book, under four hundred pages.  It encompasses the lives of three women in three different times in history, 1700s before the slave uprising, 1800s , and fourth century .  Their lives are intertwined by the actions of a goddess who influences their life choices. 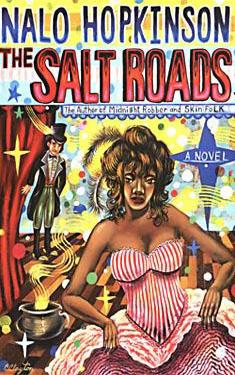 All three main characters are incredible.  First there’s the slave woman who is the midwife and healer for the other slaves on her plantation.  She is the elder, and bears the responsibility for keeping the old ways.  Second, there’s Jeanne Duval, a mixed race Haitian dancer and actress in .  She is the lover of a famous French poet.  The character is a fictionalized version of an actual historical person.  The third is the Egyptian prostitute and slave Meritet who goes on an adventure to what was after its fall and becomes St. Mary of .  Hopkinson creates three very vivid characters with lots of life who traverse intense difficulty to find resolution in their lives.

Needless to say, a major theme of the novel is slavery, but it also discusses racism and sexuality.  It has a lot to say about same and opposite sex relationships, as well as interracial relationships and mixed race persons.  The brilliance of Hopkinson I think is that she can bring all this discussion into her characters while still maintaining awesome prose and plot.

The one tough spot for me was the story line of the goddess Ezili.  It took me most of the book to really get into her sections.  I found the prose in her sections very difficult to absorb, particularly at the beginning.  It became a little easier to follow once I understood how she was taking possession of the characters.

The narrative is a little non-traditional.  It bounces between first and third person and between the three main characters and the goddess.  Except for the aforementioned story line of Ezili, I didn’t have any trouble with it.

I give the book four stars out of five.  I took off one star for the Ezili narrative.  It prevented me from feeling total connection with the book.  However, that shouldn’t prevent one from reading the book.  The plots of the three women are completely absorbing, leaving you hoping for happy endings for their extremely difficult lives.
Posted by Stephen P at 9:37 AM