The third book in “The Witcher” series continues the dark fantasy fun of its predecessors.  I thought this was a trilogy, but now it seems the saga is five books, not including the two prequels.  The fourth book is just making its way to my library, and I think I’m the first to place a hold for it.  I was a little disappointed to find that the story did not end here, but the series is just so entertaining that the disappointment didn’t last.  My only regret is that with the books being published annually, I won’t get to the grand finale until next year. 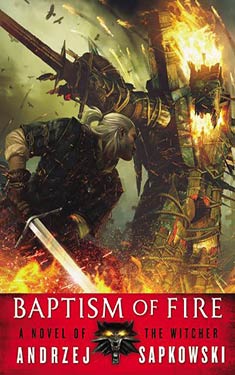 In this installment, the focus is much more on the Witcher himself, Geralt.  He’s seriously wounded at the end of the last book and has to recover in the magical forest of the dryads.  There he meets a woman named Milva who’s an incredible archer.  Once he’s recovered, she joins him on his journey to save Ciri.  Eventually, the twosome meets up with the a few others to form a fellowship on the quest.  Geralt does this reluctantly as he is a lone wolf, but eventually comes to see that it might just be better to have some help on the way.

There’s more war as well as a coming together of the major sorceresses of the nations.  The conclave is in response to the war and to the coup that took place in the last book.  The women decide that magic must survive and must take its place above the pettiness of nations.   Despite my usual complaint of there being too many characters, the scene works well and kept my attention.

It’s tough to come up with more analysis of this book as it is much the same as the previous two, and I expect I’ll have the same problem with the fourth book.  The one thing I really noticed though is that Sapkowski likes his bad-ass women.  Milva is probably the best archer in the land, and she doesn’t take crap from anyone.  And I was beginning to think that the sorceresses were a little to girly initially and that many of their scenes were a little soapy with too many references to, believe it or not, makeup.  But the conclave really drove home for me that Sapkowski created powerful women characters in this novel.  Considering these stories came out of 1980’s , I find it quite remarkable, and very entertaining.

Another item worth mentioning is that Sapkowski introduces a vampire into the mix.  The timing for me was great, having just recently read “Carmilla”.  But this isn’t your run of the mill eastern European vampire.  This one is also a surgeon.  To go into more detail would be a spoiler, but suffice it to say, it makes for a fun read.

I continue to give the books in this series four stars out of five.  There are still times I think the writing, or at least the translation could be better, and the number of characters still makes my head spin, but it’s just so entertaining, I can’t put the books down.  I can see why they made a video game out of the series.
Posted by Stephen P at 3:13 PM