I’m totally out of order reading the Witcher series.  Having read Books 3, 4, and 5, I’ve now read the first book.  It was the first to be published in as well as here.  Fortunately, the first book is a collection of stories about the Witcher that act as a prequel, or at least sets up the background for the Saga that begins in Book 3.  It introduces Geralt of Rivia, the Witcher, taking a break to recover from injuries in the .  As he heals, he tells several stories of his monster fighting career.  It’s the sort of swashbuckling fun that this series is known for, and which inspired the immensely popular video games based on the books. 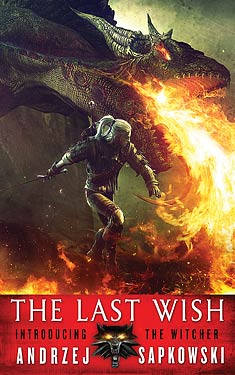 Being a collection of stories, I must point out my favorites.  The very first story is great.  It is the explains the nature of the Witcher and what he does best, fighting monsters.  I also liked the last story, where he meets the lovely, scary, and snarky sorceress Yennifer, who plays a big role in the Saga.  With her, he must defeat a powerful djinn before he destroys a whole town.  In another, we first meet his sometimes travelling companion Dandelion, a poet, troubadour, and storyteller whose mouth gets them into loads of trouble.  There’s also a story which is a sort of deconstruction of Snow White and the Seven Dwarves.

Most importantly, the book introduces us to the background story from which the Saga which begins with Book 3 generates.  It tells the story of a Geralt dealing with the monster who comes to claim as his bride the daughter of the Queen of Calanthe.  This union is what spawns the sorcersess/witcher prodigy Ciri, who becomes the main character and source of all conflict in the Saga.

Like the Saga itself, this book is a fun, easy read.  It focuses more on Geralt and monsters, which is what I had been craving through the Saga.  Again, I give this book four stars out of five because it is so fun.  It’s not great literature, but it’s a dark, high fantasy with snarky humor and swashbuckling action.
Posted by Stephen P at 11:35 AM