Wow!  This is an intense book.  It’s about a prophesy of a savior of an ethnic cleansing and the girl who seems to be its fulfullment.  It has sorcerers and juju and magical beings in a post-apocalyptic Saharan Africa.  It’s also about weaponized rape and female genital mutilation.  It’s not for the light-hearted.  If you read it, it will leave an indelible mark on your soul.  Just reflecting on it to write this review leaves me all shaky inside.  This book was nominated for a slew of awards, winning the World Fantasy Award in 2011. 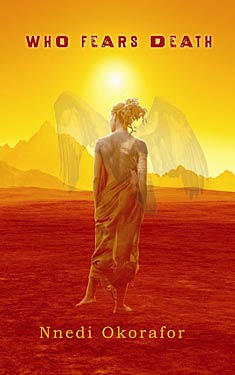 The story is about Onyesonwu, an Ewu, that is, a child of rape.  Her mother is of a race that is being enslaved and wiped out by another race.  Her biological father is powerful sorcerer.  Onye and her mother live several years in the desert before settling in town.  Like all towns, Onye is shunned.  Ewu are considered born of evil and therefore evil.  Around the age of nine, she mysteriously turns into a sparrow and flies around, changing back into a human high up in a tree.  That’s when her mother is sure that she is destined to be a sorceress.  On her eleventh birthday, Onye allows herself to be circumcised with three other girls in a coming-of-age ritual because she believes it will make her more acceptable to the townspeople.  She meets a boy, another Ewu named Mwita who has some magical abilities as well.  She tries to convince him to introduce her to his sorcerer mentor Aro.  Aro shuns Onye because she is female.  Eventually, her persistence wins and Aro takes her on as an apprentice.  When she accidently slips into the spirit realm, she discovers someone is trying to murder her.  Thus begins her quest to confront this evil and fulfill the prophesy to free her people from a religiously sanctioned genocide.

Yeah, heavy stuff.  The circumstances of Onye’s birth and circumcision all happen pretty quickly at the beginning of the book.  Her mother’s rape, the general weaponized rape, enslavement, and genocide make her pretty rageful.  And the treatment of women within her own culture also leaves her full of anger.  Of course, all this interferes with her ability to control her magic.  She must learn to quieten her emotions if she is going to successfully fight the evils and rewrite the holy book that allows all this horror to continue.  Despite carrying this personal and cultural anger, it’s easy to empathize with her.  I mean, wouldn’t you be angry too if this was the cultural norm?

The book is written in first person so it has the feeling of immediacy, making it all too real.  In fact, the author acknowledges a story on NPR about weaponized rape in the Sudan that was the germ for this story.  The world building is really good, but a little weird.  In this post-apocalyptic world, there are some remnants of our present, like hand-held computers and scooters.  The apocalypse happened because the people apparently abused the world for technology.  But rather than it all going away, there are still some things left that people use.  And yet there is also magic in this world.  It makes for an odd, but engrossing setting.  The prose is really good.  It’s not flowery, but rather pretty forceful.

I did have a problem with the pacing in the middle of the book, on the journey from Onye’s hometown with Mwita, her three friends, and one of her friend’s betrothed.  The journey had a lot of character development, insights, and action, but it seemed to move slowly compared to the beginning of the book.  It was good that it was a little less heavy than the beginning, but I kept feeling like I wanted it to move on.  Things kept on happening to Onye and her companions that at times felt unnecessary, as if maybe fifty pages could have been edited out.

Despite how the middle seemed to lag, I had to give this book five stars out of five.  Even as I sit here in my comfortable apartment writing this review, my eyes keep tearing up from the horrors of Onye’s world, knowing that this type of brutality happens today.  This is how powerful science fiction and fantasy can be, throwing the realities of our world into our face in the guise of futuristic and fantastical narrative.  It’s made me angry, sad, and very uncomfortable.  Not many books have done this for me.  This is the first Okorafor book I’ve read since the Binti trilogy, and I must say she is an awesome writer of meaningful, powerful stories.