I’ve read many Pern novels as well as The Crystal Singer (all before I started writing reviews, so no links).  I really like McCaffrey, even though some of those early Pern novels didn’t have the best writing.  So when this came up as a possible selection for my book club, I was gung ho about reading it and voted for it.  Well, this was one of the most boring books I’ve read this year.  It’s one of her later novels (1995) and the prose and dialogue is very good.  The story just wasn’t all that interesting.  It took me about half the book to be interested in the main character and more than that to be interested in plot.  It took me a full week to get through this novel of a little over three hundred pages, which is slow for me.  This book is the first of a four-part series, and I have no desire to read the rest. 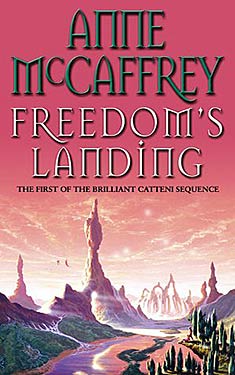 The plot is fairly simple.  Aliens called the Catteni have invaded Earth and taken many Terrans as slaves.  Kris is a Terran slave on a colony planet who has escaped with a flying craft and is hiding in an unpopulated wooded area.  A chased craft crash lands near her and she goes to find a hurt Catteni.  She helps him, but when he suggests he might rape her, which apparently happens to a lot of female slaves, she knocks him out and tries to sneak back to the city with him.  However, they are captured along with many other slaves from Earth as well as from other planets, put aboard a spaceship, drugged, and sent to colonize a new planet.  Apparently, it’s the modus operandi of the Catteni to send slaves to find out if a new planet is inhabitable based on whether they survive or die.  There she ends up befriending the Catteni whose name is Zainal and along with several hundred other slaves begin the process of trying to survive this new planet.  The rest of the novel is about exploring the area where they landed, discovering the planet’s mysteries, and discovering the truth about the Catteni’s reign of terror throughout the galaxy.

Right from the beginning, I found myself not interested in Kris’ plight.  There was nothing to make her interesting.  The story is told in third person, mostly from Kris’ point of view, but it’s narrated action.  We don’t get to know her for a very long time.  Stuff just happens to her.  And the whole finding Zainal, knocking him out, getting captured and sent to the new planet all happens very quickly.  Next thing we know, we’re on Botany (the name the slave colonists give it) and everyone is pitching in to form a little society.  It was about halfway through the book when I realized I liked Kris.  She’s a tough, self-sufficient woman, though she starts to fall in love with Zainal.  Yes, it does become something of a romance novel.

Zainal was also likable after quite a while.  He’s in the same plight as everyone else, sent to Botany because he killed another Catteni.  He works hard to be part of the team, offering as much of his knowledge of the Catteni and their colonization as is useful.  He speaks the languages of the other alien slaves and helps them communicate with the Terrans who mostly only speak English.  After a while, almost everyone comes to appreciate Zainal, recognizing his work in helping them survive.  There’s only one jerk who doesn’t warm up to Zainal as well as harasses the women for whom they build a stock to punish him in.

As far as interest in the plot, I had a very difficult time keeping focused on all the exploration of the planet.  It turns out the planet is a food source for an unknown alien race.  The food cultivation and collection are fully automated.  When the Catteni look at new planets to colonize, they look for heat signatures of humanoids so they thought it was uninhabited.  The good news is that our bunch of slaves have an easy food source.  The bad news is the flying robotic caretakers view them as food and try to round them up and process them.  So the slaves have to figure out how to dismantle the caretakers.  Fortunately, they have a diverse collection of people with former occupations including engineers who can tackle problems like these.  In fact, they seem to have just about every occupation necessary for establishing civilization.  It’s very convenient.

One thing that got me was that there were a lot of stereotypes considering this book was written in 1995.  There’s a lot of nationalities stranded on Botany including Irish, Australian, Nordic, and a token African-American guy.  He’s a cook.  They all come too close to being stereotypes of their cultures.  It makes you feel like this book was written in 50s, rather than the 90s.  Some of it got a little uncomfortable for my taste.  The Australians were even sheep farmers for goodness sake.

I give this book two stars out of five.  The struggle for survival wasn’t all that difficult.  To many things worked out for them.  Everyone got along, except for one guy who was appropriately named Dick.  Zainal, while likable, was too nice too quickly.  Kris, while nicely kick-ass, was not quite three-dimensional.  And the exploration of the planet simply bored me.  I’m glad this book was not my introduction to McCaffrey, because I would have been very hesitant to explore her other, better works.