Kowal cranks out another terrific story in world of Lady Astronaut Universe.  It’s a story that is a sort of follow up to The Calculating Stars and the timeline is parallel to The Fated Sky.  Rather than following Elma York, it follows Nicole Wargin, a pilot who goes to the colony on the Moon after Elma’s ship takes off for Mars.  It’s a really fast-paced novel filled with tension, espionage and personal drama.  I really liked this book and can see how it was popular enough to snag a Hugo nomination for this year, but in terms of writing, I felt it was too similar to the first two books.  Still, it’s a very strong novel and an exciting read. 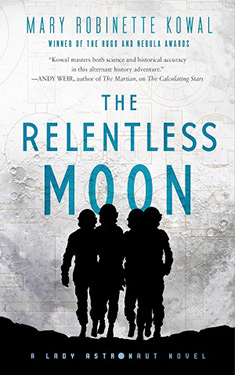 Nicole is married to Kenneth, the governor of Kansas, which has become the center of the US since the meteor event of the first book.  It’s the home of the IAC, the international space program, and Kansas City has become the capital of the US.  Kenneth is planning to run for president on a platform of expanding the space program.  The current president sides with the Earth First movement, a grass roots organization against the IAC and its funding, which seems to be at the bottom of more and more terrorist activities.  After a spaceship launch to the Moon fails due to an explosion which is secretly believed to be a terrorist event, Nicole is assigned the next flight to investigate if there are any terrorists on the Moon.  That flight nearly crash lands on the Moon, and more and more things go wrong at the station.  It becomes clear that the Earth Firsters have at least one agent on the Moon and are sabotaging the station.  Nicole’s whole mission is to find out who the saboteurs are which becomes a race to keep the station and its inhabitants from being destroyed.

Nicole is another terrific character.  Like Elma, she has her own problems, most significantly, she’s anorexic.  She’s been hiding the condition and been able to contain it mostly with the help of her husband.  However, once in space and with the stress of the investigation, she loses control and eating becomes a struggle.  She’s simultaneously strong and weak, powerful and vulnerable.  In the first two books, Kowal showed that she can create a character like this in Elma, and she successfully does it again in this book.

The other characters are also quite strong and realistic.  I really liked the Lindholms, a black couple who are also on the Moon mission with Nicole.  Eugene is a major in the IAC and Myrtle is a pilot.  They and their interactions as a couple are very believable.  Besides dealing with the stress of the investigation, the must deal with racism, most specifically from the white South Africans on the mission.  Remember, this is an alternate history of 1963, and civil rights are still in their infancy.

I really liked the mystery of trying to figure out who the Earth First plant is.  At first, I was not really keen on it, and at over five hundred pages, I thought it would drag on terribly.  Fortunately, there was enough action and personal drama that made it very readable.  I was sucked in pretty quickly.  The progression of problems, the solving of them, and Nicole’s constant battle with the anorexia along with a broken arm she sustains made the plot move at good speed.

I give this book four stars out of five.  It’s a well-written mystery with an excellent handling of racial, sexist, and personal issues.  My only real complaint was that it was so alike in tone and form to the first two books that it doesn’t seem like anything new is being covered here.  It’s a marvelous book.  It’s just lacking in originality and punch.  I’d still recommend the trilogy to anyone looking for a good strong read.  My understanding is that there is supposed to be a fourth book in the series, but from what I can see it’s not scheduled to come out until 2022.  Yeah, I’ll probably read it.