The Only Good Indians

I don’t read much horror anymore, maybe one or two a year.  I picked this one because it was nominated for several awards this year and has won one, the Stoker award.  The author is Native American, and writes horror books featuring Native American characters, culture and tradition.  The book is also a sort of urban fantasy in that it takes place today and has magical, horrible things happen.  In this case, four Native American men are being pursued by an Elk Head Woman seeking revenge for a terrible incident which happened ten years prior.  It’s different, creepy, and gory.  I really enjoyed it, finishing it pretty quickly because I didn’t want to put it down. 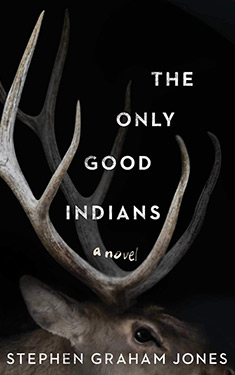 The story surrounds four men who in their late teens/early twenties went hunting for elk on the lands designated only for elders to hunt.  A heard of elk appear in the midst of a snowstorm.  They begin shooting willy-nilly, killing about nine.  When they check their spoils, one of them, Lewis, finds a young doe which should be dead but is still alive.  He shoots it again and again to make sure it’s finally dead.  As he’s prepping its body, he finds the doe was pregnant out of season.  He takes the fetus, buries it, and makes a promise to use all the mother’s meat.  Fast forward ten years, and one by one, a strange Elk-headed woman begins stalking the four of them, their friends, and families.

The Elk-headed woman is not part of some Native American folklore, just an invention of the author.  Some of the action takes place on the Blackfeet reservation, some off.  It gives us different glimpses into their lives: staying on the reservation, trying to escape, marrying a woman from a different nation, marrying a white woman, as well as the more well-known themes like alcoholism.  It also features a sweat lodge with two of the main characters and a fourteen-year-old boy being initiated into his first one.

This book was really well done.  I liked the way we were introduced to the characters and experienced them as the Elk-head woman takes different forms and begins stalking each one.  It was a great characterization device, giving each character’s history and current lives while mixing it with the story of the elk hunt and the Elk-head woman’s stalking.  It never felt like boring exposition.  It gave me empathy for each of the men.  We also get to know the daughter of one of them, Denorah, a young teen basketball prodigy who is also a target of the terror.  She does not know the history of the Elk hunt, but she realizes some kind of whacked out demon is after her.

The creepy factor was also really good.  The whole first half of the book keeps you guessing whether this is real or in the minds of the men.  By the time it clears up that question, you’re hooked.  Also adding to the creepy factor is that about halfway through the book, the point of view of the narration becomes second person.  It wasn’t as difficult as some second person narratives I read.  What makes it creepy is that the “you” in the story is the Elk head woman.

My only issue with the book was that sometimes the sentences were fragments, dependent on the sentence before it.  I realize that this is a style choice, but it came off as disjointed in these places.  It took me a while to get this cadence down, but I did.  And for some reason, it made sense the faster I read, which I did during the exciting climax.

I give this book four stars out of five.  I thought it was excellently done except for the sentence fragments.  I also found the story to be like several vignettes since it follows the different characters serially, which made it difficult to feel as emotionally involved as when I would award five stars.  Nonetheless, if you’re looking for a different kind of quirky horror, this is the book for you.