The Citadel of the Autarch

The final book in “The Book of the New Sun” tetralogy is both an easier read than the first three and a complex, unresolved ending that leaves you realizing that this series is a complex, multi-layered saga that requires multiple reads and active discussion and analysis.  It more or less answers my question as to why I had such a tough time staying focused through a lot of the prose of the earlier books.  This series is an enigma and it has only been by reading some analysis of it online that I am beginning to understand what was really happening throughout it.  I’m not going to try to convey that in this review.  It gives away too much of the dramatic, crazy ending.  You’ll have to read it yourself, perhaps multiple times, as I probably will to really understand just how great a writer Wolfe is. 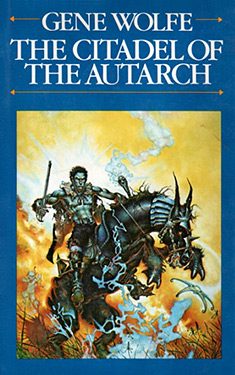 Severian continues his wandering north to the war zone between the Commonwealth and the people of the north.  He raises a soldier from the dead using the Claw of the Conciliator, and they both end up at a something of a M*A*S*H unit run by religious order which used to be the possessor the Claw.  There he recovers and finds himself the judge of story contest to determine who will marry a beautiful female soldier.  Before he makes his decision, he is tasked to move an ascetic from a castle in path of the war.  There he learns more about a race of people who are actually aliens watching over humans.  When he returns the hospital is destroyed and most of his acquaintances are dead or dying.  He continues toward the war, enlisting, and being wounded in battle.  He is saved by the Autarch who then reveals Severian’s destiny.

This book is a little easier reading because there are more dialogues and exposition.  It starts to tie up many loose ends left by the first three books.  The prose is still gorgeous, but in this book, you really begin to question Severian as a narrator:  what were lies, what was truth, and ultimately, how many Severians are there.  Yes, I used the plural.

TBOTNS is considered a science-fantasy.  The first three books feel like fantasy, but this conclusion reveals that a lot of it is based in science fiction.  We discover that there are aliens shepherding human-kind through its destiny.  There is time travel bouncing the aliens around Severian’s life.  There are parallel universes, energy rich black holes, and “stellar weapons”.  You get inklings throughout the series that there is much more science fiction that what you think you see on the surface, but you don’t begin to understand it all until this last segment.

One analysis I read called TBOTNS the Ulysses of SF.  There are puzzles and questions throughout the book.  There’s a story that the publisher asked Wolfe to add single paragraph at the end that wrapped up the story with a “and they lived happily ever after”.  Wolfe instead wrote a coda piece that performs this function.  Considering that at the end, I thought, “What? Wait a minute.  Noooo!   Yesssss!  Argh!”, I’ll have to pick up that fifth book.  There is also a companion book of essays about the series by Wolfe called “Castle of the Otter”, a mis-quote of the title of this fourth book.  I’ll have to pick that up too.

Don’t let that discourage you from reading this.  It is an amazing work, with glorious prose, beautiful characters, and a brilliant, complex universe.  It leaves you with, “I have to know more!” rather than a simple “I don’t get it”.  This series is one that at some point, I will want to read at least one more time.  I give this book 5 stars out of 5.
Posted by Stephen P at 5:32 AM