The Sword of the Lictor

“Sword of the Lictor” is the third installment of the Book of the New Sun.  It continues the journey of Severian, a torturer who cannot seem to find his place in the world.  The story picks up with him in the destination of his exile journey.  Once again, he shows mercy to a “client”, necessitating another flee from possible indictment and more progress on returning the Claw of the Conciliator to its rightful guardians. 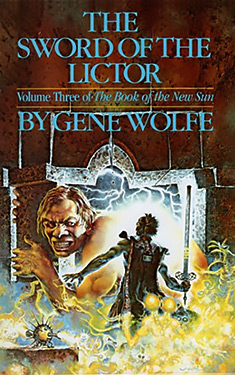 One of the basic themes of the series is relationship versus aloneness.  The theme runs through each book, but in this installment, Wolfe really drove it home for me.  This time, Severian loses a woman he loves and a foster son.  Being immersed in a feeling of aloneness and abandonment myself at this time, I was devastated by these losses.  I related to his stoic retelling of these trials, as well as the moments when his emotions burst through and overwhelmed him.  It reinforces the idea that while we may have the occasional companionship, ultimately, we must forge our way through life alone.  Nothing is permanent, and the randomness of life never lets us get too comfortable with the people whose paths may cross ours.

Unlike the last book in the series, “Sword” seems to have a stronger sense of movement and purpose.  While it still ends with Severian on the road, it feels less meandering.  He’s determined to return the Claw, and must get through numerous trials to accomplish this.  In one very intense sequence, Severian is staying with a small family in the mountains.  Their lives are often disrupted by a creature that incorporates into itself the life force and memories of the people it devours.  This is a more evil, perverted variation on the corpse eating feast in the last book.  Instead of sacramentality, the monster uses the essence of its victims to manipulate those it stalks into becoming its next meal.  The scene is truly terrifying as Severian tries to keep the family from willingly running directly into the mouth of doom.

Severian’s other encounters are equally enthralling, including the climax of the book, where he learns the true nature of Dr. Talos and Badlanders, the leader of the acting troupe from the first two books and his lumbering giant sidekick.  The exposition and ensuing battle scenes are riveting.

Again, the prose is the star of this book.  But more like the first book, “Shadow of the Torturer”, it didn’t distract me from the plot and the action as much.  There were still times when I was lulled by the glorious descriptions, losing track of the action, but less often than during the second book.  Perhaps that goes back to my point about “Sword” seeming to a better sense of purpose in itself.

Like its predecessors, this book was nominated for and won multiple awards.  Wolfe’s imagination and writing continue to be top notch.  I give this book 5 stars out of 5.  I was incredibly moved and devastated by the loss in this book.  If I had read this when my own life was more stable, I may not have been as emotionally affected.  But since I was, it meets my criteria of being an excellent book that invokes a strong emotional reaction.