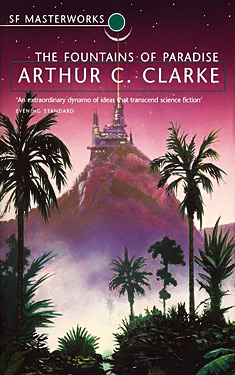 I read this book before “Rama,” but am writing this after my review of it.  Despite this book having a little more action and characterization than “Rama,” I had a tougher time getting into it.  It didn’t grab me until the exciting climax.  The juxtaposition of the ancient King’s biography and the construction of the gardens were interesting, but still didn’t grip me.  The same held true with the conflict with the monks.

As with Clarke’s other books I’ve read, “Fountains” is really well written.  His descriptions of everything is vivid and precise: the science/engineering, the characters thoughts and actions, the history.  But again, it reads more like non-fiction than fiction.  The characters don’t have emotional arcs.  They just are.  Things happen to them.  They respond.  It’s all very sterile.

I give this book 3 stars because of the imagination that went into this book, and for his amazing descriptive abilities.  If I could have just felt something for the characters, I would have given it four stars.
Posted by Stephen P at 6:36 AM