The Claw of the Conciliator

I finally began reading the rest of the Book of the New Sun series by Gene Wolfe.  “Claw” is the second in the series and picks up with our torturer Severian alone on his exile journey to his new home.  Like the first book, “Shadow of the Torturer”, this book is chock full of gorgeous prose and insight into Severian’s character.  I loved it, loved reading it, but felt it suffered from the usual plight of the sophomore book in a fantasy series: a sense of meandering. 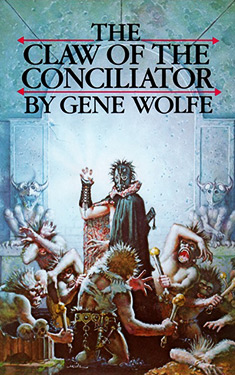 Jonas is a wonderful character.  He has become Severian’s traveling companion, friend, and confident, not unlike Sam Gamgee in LOTR.  Jonas seems to have an unflagging desire to help and support Severian, but it is not exactly made clear why until well into the book.  And even there, it’s a little murky.  It didn’t matter though, I found him incredibly interesting and likeable.

Ultimately, though, the book is about Severian’s experience with the “Claw”, a stolen gem that was slipped into his satchel unknowingly.  It is a relic of the Conciliator, aka the New Sun, a sort of savior whose return is supposed to be imminent and necessary for the restoration of the dying sun.  The Claw has amazing powers that Severian doesn’t quite understand, but tries to use, sometimes successfully, sometimes not.  He is now its guardian, and he recognizes that he must return it to the religious order that formerly guarded it, and he regularly switches allegiances and makes oaths he later breaks, just to further his quest to return the Claw.

There is one scene that really sticks out.  Thecla, the woman to whom he showed mercy in the first book by letting her commit suicide rather than suffer under his torture, returns.  At a feast by the revolutionary to whom she was consort, her roasted body is served.  Severian attains Thecla’s memories and experiences by eating her flesh and drinking a strange potion.  Like a cross between Eucharist and the rituals of some remote primitive peoples, this sacramental meal completes the intimacy between them.  Now a part of him, her essence aids him throughout the rest of his journey.

What really struck me again about this book was the prose.  It is written so beautifully that every paragraph sent me into a blur of images and feelings.  Unfortunately, this was also part of the book’s downfall.  I often would find myself so lulled by the prose, reveling in its images and feelings, that I would miss the action.  I regularly had to go back and reread sections to see how and where where I missed the action because it so seamlessly blended into Severian’s thoughts and reflections.  It accentuated that meandering feeling that made it hard to determine where the plot was going.

But I can’t fault the book too terribly for this.  It is so beautiful, and the universe and characters are so interesting, that it’s hard to stop reading.  Even though I felt that the plot meandered without a clear direction, it’s still an amazing read.  It’s easy to see why the book was nominated for five and won two awards.  Gene Wolfe is a terrific writer.  I give this book 4 out of 5 stars, that is, it’s an excellent book.  It just didn’t have the emotional impact “Shadow of the Torturer” gave me.
Posted by Stephen P at 11:15 AM