This was my second reading of “Ender’s Game”.  I loved it the first time, though I don’t remember the reasons.  That’s part of why I write reviews now, to document my feelings about a book, and hopefully give enough explanation that later I can read it and go, “Oh, yeah”.  Reading it again, I still loved it, and this time I can say with confidence the reason: this book is horrifying. 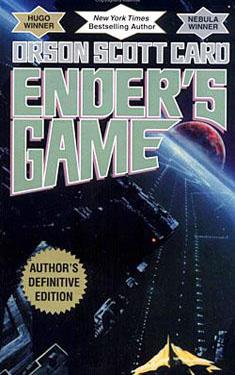 “Ender’s Game” is one of the most widely read and well-loved contemporary science fiction novels of all time, save perhaps for “Dune” and a few others.  It tops World Without End’s Most Read list and several of Goodread’s lists.  It’s about a brilliant boy who is a “Third”, the third child in a society where a family is normally only allowed two children.  In exchange for being allowed to have a Third, his family promises him to the military.  At age 6, after being abused by his older brother, Peter, for most of his young life, an officer comes to take him to military school.  Ender’s only regret is leaving his beloved older sister, Valentine, who protected him from Peter.  In the orbiting academy, Ender’s training is a lonely affair.  Set up by the teachers to be generally ignored or hated by his peers, he has to rely on the skills he learned from surviving life with Peter.  By age 10, he progresses to command school where he learns he is humanity’s last hope in the war against an alien race.

First of all, this book is an easy read.  It grabs you from the first few pages and doesn’t release you until the very end.  As much as I like prosy, literary novels, I also enjoy quickly paced, matter of fact writing.  We spend a lot of time in Ender’s head, and some in Val’s, but the pace never slackens.  Ender’s life in military school is a series of tougher and tougher obstacles, both military and interpersonal, and his conquering them proves  that Ender has what it takes to defeat the enemy Buggers.

What’s horrifying to me is that all this happens to a boy.  Though young, Ender never has a childhood, from the abuse by his brother to the indoctrination and conflicts of the school.  At age 6, he despairs profoundly, and unbelievable rage percolates just below the surface of his brilliant, logistical mind.  He learns that he will never really have friends and discovers that no adult will protect or comfort him.  Reading the book, it’s easy to forget that Ender is so young.  I think I was more conscious of it this time, and that’s why I was so horrified.

Questions of morality arise from Ender’s circumstances.  Does being manipulated into a wunderkind strategist and killing machine excuse him from the guilt of his actions?  Is it brainwashing?  Does he ever really have a choice?  Throughout the book, Ender struggles internally with both his inner and outer demons.  But again, it is horrific (I know I’m overusing the word) that a child must endure this.  And ultimately, it made me wonder how easy it would be to turn a young victim into the next Hitler.

I also have to mention that I was apprehensive about rereading this novel and it’s sequel.  I have read a lot about the author’s attitude and actions toward the LGBT community and I was concerned I wouldn’t be able to judge the book without bias.  Although he has backed down on a lot of his hard-line stance, I wonder if he did this simply to counter the boycotting of the movie version which was released last year.  I guess there’s a part of me that won’t believe him until I see a photo taken of him dancing with a gay person at a bar, a la Anita Bryant.  That said, I was rather shocked I was able to enjoy the book and enjoy and review it on its own merits.

I give this book 5 stars out of 5.  It evoked a tremendous emotional response in me.  Instead of using that same word again, I’ll say that it devastated me.  I think this is a must read.  And despite the fact that it takes place in the future in zero g during an alien war, it’s ultimately soft science fiction, a morality tale of a most extreme form.
Posted by Stephen P at 8:50 PM