The War of the Jewels

This is the eleventh volume in the History of Middle Earth series by Christopher Tolkien.  This one focuses on the development of the later Silmarillion works after the publication of The Lord of the Rings.  This was a companion piece to volume 10, Morgoth’s Ring.  Together, they cover most of the works of Tolkien’s legendarium.  It is not quite as tough a read as Morgoth’s Ring, but it’s still only for the die-hard fan looking for intensive detail into the development of the stories.  The only part that I had trouble with was the final chapter, which was a detailed description of roots and stems of the different Elvish languages. 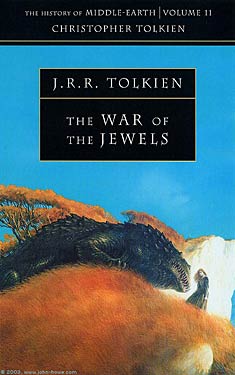 The book begins with the Grey Annals, which are a year by year history of the region known as Beleriand.  The biggest sections deal mostly The Children of Hurin, and a little on The Fall of Gondolin and Beren and Luthien.  There are more detailed accounts of these three later in the book as well.  They are also the stories that Christopher Tolkien recreated in separate volumes, kind of creating its own trilogy. It is interesting to see the development of these stories in Tolkien’s later years.  He’s mostly concerned with details here, specifically, the names of the characters, the spelling of their names, and the correct years of the events occurrences.  Sometimes it gets a little tedious, like when the name changes from change an “n” to and “nd”, or vice versa, or the substitution of an “a” for an “e”.  Once again, it shows how he got lost in the details of his work and gives some sense of why the Silmarillion was never published in his lifetime.  It also has some comments by Christopher as to changes he would have made to the Silmarillion had he done more extensive research into all the scraps of writings he found in the many years he spent getting this HoME series out.

One very interesting section of this book was the story of Hurin after his children had died and he was released from Angband, Morgoth’s realm.  This was never included in the Silmarillion, or published before this point.  He goes first to the ruined halls of Nargothrond, then to the people of Haleth, his not-so-distant kin, in the forest of Brethil.  Rather than treated as a war hero with respect, he’s arrested and being contemplated for execution.  How this plays out is very interesting, as he reveals himself, the tragedy of his family, and the illegitimacy of the ruler.

But it is clear that the story of Hurin’s children, Turin Turambar and Nienor Niniel, is perhaps the most profound work to come out the works of the Elder Days.  It shows how devious the evil of Morgoth is.  It is also an interesting meditation on the nature of fate.  It seems that no matter how much Turin tried to overcome the evil, he seemed to fall into its hands until fate was fulfilled.  It’s truly a depressing tale, but rich and complex.

I give this book four out of five stars, as I do all the HoME books.  Even when the reading is difficult or tedious, the wealth of information is staggering.  There’s always something new to discover in each of these books.  But at last, I’m nearly done with the series.  I only have volume 12 left, which I will be reading after a break with a book for book club.