I watched the movie version of this book right after finishing it.  What a mistake.  The movie is nothing like the book; it kept just the barebones concepts.  It made me realize just how much I appreciated the book.  It’s not a great book, but it was very good:  interesting, suspenseful, and kept me reading.  The prose was cold, reflecting the stark atmosphere of the post-apocalyptic setting, as well as the weather outside the days I was reading this (haha).  Normally, I wouldn’t like this kind of writing, but it matched the mood the book was trying to create.  I also thought the whole concept of using the mail as a unifying force for the disparate communities surviving after war, plague, and nuclear winter was pretty great.  This book won a couple of awards and was nominated for a few others. 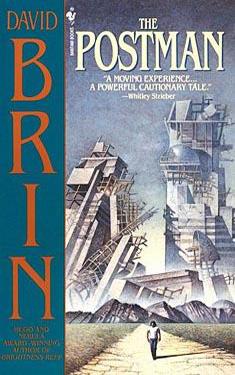 The story follows Gordon, a loner, trying to survive in a desolate Pacific Northwest USA.  He survives by performing what he remembers of Shakespearean plays and singing songs in the tiny communities he comes across, in exchange for food and shelter.  This doesn’t always work, as many of these communities are suspicious of strangers.  He comes across a mail truck with the clothed skeleton of a mail carrier.  Drenched from the cold rain, he gets in the truck and puts on the mail uniform.  Gordon poses as a mail man for these small communities and is welcomed in readily.

As Gordon goes from place to place, his lie grows.  He begins commissioning new mail people and actually carrying the mail from town to town.  And he inspires hope for a civilized future.  But the biggest challenge in this post-apocalyptic world is the army of survivalists called the Holnists, named after their megalomaniacal founder.  The Holnists are trying to force a feudal governing system, enslaving most of the people as serfs.  Gordon tries to organize a resistance to combat them.  Despite his lies, he is constantly plagued by his own conscience to keep it going because it gives the people hope and the motivation to fight the Holnists.

Like the prose, the characterization is kind of sparse.  The story is told third person from Gordon’s perspective, so he is well drawn.  He’s is in constant conflict between maintaining the lie by carrying the mail and the message of hope versus just running off after being fed.  It makes him very realistic.  Unfortunately, I didn’t feel the same about many of the other characters since we don’t spend much time with them.  They end up being relatively two dimensional.  This is mostly a function of plot, as Gordon goes from town to town, meeting different people.  But I did like the situations the traveling put him into.

I don’t really have much else to say about the book.  It’s really good, but I think I was expecting something more.  I give the book three stars out of five.  I think I would have found it a four-star book if I thought more of at least a few other characters.  But the basic conceit and message is what’s awesome.  Something as simple as communication through mail reuniting a fragmented nation was genius.  It makes one think about what would happen to today’s society if we lost the internet and instant messaging, now that so few people keep in touch via the mail.  Thinking about how cut-off we feel now when the internet goes down for a few hours due to a storm or maintenance, I think people would be pretty lost pretty quickly if we lost it for good.  It makes me wonder what Brin would have come up with if he wrote the book now, 34 years after “The Postman” was first published.