This is the tenth installment in the History of Middle Earth series edited by Christopher Tolkien.  This volume features different revisions of the creation of Middle Earth.  Like most of its predecessors, it’s for the hardcore fans who want to see the evolution of the Tolkien Legendarium.  I found this volume tougher to read than some of the others, mainly because it contained a essays and fictional ruminations on the nature of the Elves, Men, and Orcs; good and evil; and life and death.  While it may sound interesting at first, one must remember that Tolkien was an Oxford professor, so his philosophical writing is very detailed and academic, even the fictional pieces.  He was exploring the deeper nature of his Legendarium as he was trying to develop The Silmarillion for publication.  I got bogged down in it as it seems Tolkien did himself. 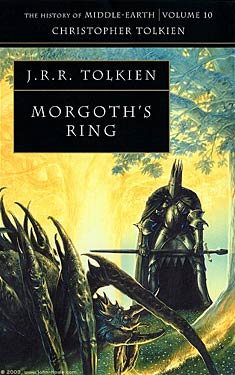 A good portion of the beginning revisits the creation story of Middle Earth.  Here we have several retellings of the story of Iluvatar’s Music that generates the Valar, the Middle Earth pantheon, and designs the world, the Elves, and Men.  Some of the biggest differences in the versions have to do with Melko/Morgoth, the most powerful of the Valar, who dissents from Iluvatar right from the beginning, producing discordant music to Iluvatar’s master Music which the rest of the Valar are also singing.  Originally known as Melko, he gets the name Morgoth from the Elves when he deceives them and turns them away from the rest of the Valar.  The major differences in the versions though, and the discussions later on, have to do with the nature of Morgoth, how his evil plans play out, and how if he is so powerful can he eventually be captured and expelled into the Void.  It turns out that Morgoth imbues his own spirit into the earth, marring it and its creatures.  Also, he incarnates, taking corporeal form.  This slowly weakens him, but it is where the book gets its title.  Just as Sauron put his essence into the One Ring, “the whole of Middle Earth was Morgoth’s Ring”.

A feature in this volume is the debate between Finrod and Andreth, a male elf and a human woman, as they discuss good and evil; life, death, and immortality; and hope and hopelessness.  At first, I was really into this piece, but this is where I began to have problems following the discussion.  It really was like an academic philosophical debate and I got bogged down in their details.  But I appreciated what Tolkien was doing here, exploring the morality of his own creation.

Later, Tolkien has essays on these same topics, including reflections on the debate itself.  These were interesting, but again, I got bogged down in the details and the back and forth discussions.  Even something you might think is as simple as the nature of the Orcs was a heated topic for him.  Did Melko create them?  This was a resounding “No” as he doesn’t have the power to create life.  However, he could capture existing beings and corrupt them to mock the children of Iluvatar.  But there are still questions?  Do they have souls?  Sauron later teaches them language, so isn’t that a sign of sentience or having a soul?  It gets very complicated.  Were they corrupted Elves or Men or something else?  I don’t think that was ever really resolved, but he discussed Orcs in quite a few essays.

I give this book four stars out of five.  Yes it was hard to read, and I didn’t enjoy it as much as some of the earlier volumes.  But it still is an amazing collection of Tolkien’s other writings.  It’s very well constructed with good comments by Christopher Tolkien.  I think the main point of this volume, and I believe the next, is to see what prevented Tolkien’s completion of The Silmarillion, how he got too deeply into the details and philosophy of his own work.  I’m going to take a break with a science fiction novel, then come back to volume eleven, the companion piece of volume ten.