After reading two books in his “Land Fit for Heroes” trilogy and loving his prose, I decided to try another Morgan book, this time, his first novel, “Altered Carbon”.  For it, he won the Philip K. Dick Award for best novel first published in the as a paperback original.  I knew it was a noir-ish thriller, another sub-genre I’m not especially drawn to, but I thought I’d give it a chance.  To my astonishment, I can say that this is the first such book where I didn’t get terribly lost, but actually enjoyed it. 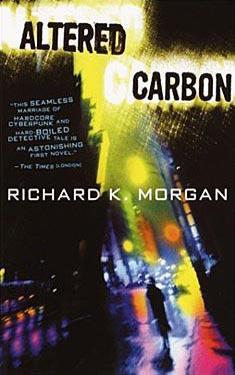 Takeshi Kovacs is an ex-U.N. Envoy (read special forces) in the twenty-fifth century who died a particularly nasty death.  Like almost everyone else who has died, the cortical stack in his neck that contains his whole essence and memory is put in storage.  Bancroft, a very rich man, pulls Kovacs out of storage and re-sleeves him into a new body to investigate Bancroft’s death.  You see, the billionaire recently either committed suicide or was murdered, and his stack was destroyed. But since he was rich enough, he had an external backup of his stack.  So Kovacs tries to piece together the 48 hours between the last backup and Bancroft’s death event.  His investigation takes him not only through the seamy side of , but into the darkness of his own soul.

Morgan really excels in creating characters with a dark edge.  Everyone has flaws, and Kovacs is no exception. He’s is not a nice guy.  He was accepted as an Envoy because he particularly violent and anti-social.  Throughout the investigation, he is in constant conflict, struggling between completing his mission and acting out in rage against anyone who crosses him.  Adding to the complexity, the body he’s inhabiting was the lover of a cop he must work very closely with during the investigation.  Needless to say, when your cortical stack gets placed in the body of someone else, some physical responses just can’t be controlled.

As in Morgan’s other books, I really liked the prose.  I’ve read a lot of SF noir where I just couldn’t get into the author’s writing style.  Maybe because of my previous exposure to Morgan, I loved every simile and description.  I generally don’t like a lot of flashback and back story, but I found it really fleshed-out Kovacs and helped explain his motivation and responses.

“Carbon” has a complex plot, but I really enjoyed it.  Morgan writes well, creating believable characters, a steamy atmosphere, and interesting science.  At times, I got a little lost, but never went past the point of no return, as I so often do in SF noir.  My excitement for this book has reinvigorated my anticipation for the final book in his “Heroes” fantasy trilogy, which I just got as an ARC (Advance Reading Copy) edition, all 638 pages.  I give “Altered Carbon” four out of five stars.
Posted by Stephen P at 6:01 AM