For some reason, this second book in the “Latro” series held onto me a little better than the first, Soldier of the Mist.  Perhaps it’s because I read it over one long weekend rather than over a week.  I think it was easier to remember the complicated story line and Greek character names when read all at once.  There are still a lot of characters and their names are often long and complex.  The plot meandered quite a bit, with there being three parts to the book which made me lose the main plot.  But I did like it.  Thankfully, I don’t have to wait seventeen years like his fans did for the next book.  “Soldier of Sidon” came out in 2006 and hopefully brings a conclusion to the story.  “Arete” was nominated for a couple of 1990 awards. 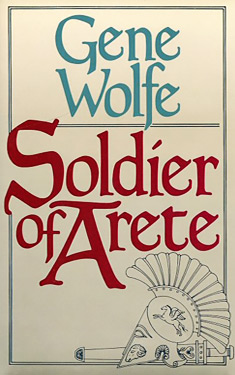 I’m not really sure of the plot.  The overarching storyline is the continuation of the Roman with amnesia and short term memory loss.  He still doesn’t know who he is or where he’s from.  He travels with a group of people, most of whom care about him and try to help him in his quest to get his memory back.  Their progress is regularly interrupted by skirmishes and redirection due to the Latro still being a slave.  This time, he has encounters with Amazons who come to his aid when he is attacked.  His entourage also grows by a lame man, a nymph, a young boy, and a man whose hand he chopped off during a battle.  His travels take him through the Greek coast (I think) to find an escaped convict.   He ends up in Sparta where he participates in athletic games that alternate with the Olympiad.  Throughout the journey, he continues to see gods, ghosts, and this time, mythical beasts.

Latro, whose real name may be Lucius or maybe Lucas, grew on me as a character.  Where in the last book I found him to be a frustrating narrator, I found myself empathizing with him.  I guess I finally accepted the basic conceit of the book.  I also came to like Io, his own slave, a young girl, perhaps a teenager, who might be falling in love with him.  Latro also picks up another slave, Polos, a boy without a family who doesn’t want to be free because he’s afraid that he will be picked up by an abusive master.  I think the thing that really got me about Latro, though, is that he becomes a reluctant hero.  He has no idea what he can or can’t do, so he surprises himself and others as he battles the different enemies they come across.  Everyone in his entourage grows more respectful of him and this reputation as hero spreads throughout the land.

The prose is very nice, but I think the form of the novel makes the action less dramatic.  Latro writes down everything of significance of the day that night so that he can read it the next morning and have some inkling of what’s going on.  The way he (and of course, Wolfe) writes is that the end of a chapter has something significant happen, but then it is explained the next chapter.  While the events are dramatic, there’s no excitement because we already know what happens.  It’s like exposition, but not quite.  So while I was into the story, it didn’t propel me from scene to scene.

This certainly is not a series you can read quickly.  It requires a lot of concentration.  One of my friends calls Wolfe’s writing byzantine, and I must agree.  While it doesn’t propel you through the book, you do end up trudging (as in walking with intensity and purpose) through because you want to see what happens next to Latro.  I give the book four stars out of five, which is really a round up from 3.5.  I liked it better than the first book and still want to see what happens in the next.