I was taken by surprise by this book.  This 1983 World Fantasy Award winner by an author I never heard of was an astounding book.  Comprised of four related novellas, it’s about the best sword and sorcery book I’ve read.  It’s not just a D&D adventure, but a mythic journey into the underworld, replete with demons, giant bugs, sorcerers, and aliens.  Nifft is a thief who takes on well-paid missions that provide him with his own, personal Dante’s Inferno experiences.  And the prose is truly outstanding. 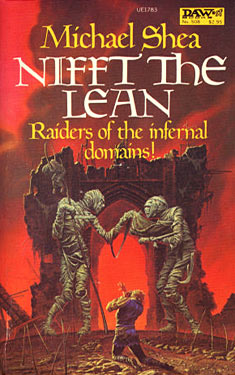 Each novella is narrated by Nifft, except for the last one where he is more a spectator than an active participant.  In the first three, he, with his thief buddy Barnar, have a specific quest.  In “Come Then Mortal, We Will Seek Her Soul”, the two are visited by a ghastly ghost of a woman who made a lovers’ pact.  She died, but her lover didn’t.  She engages the two to find him and bring him to the underworld for breaking his oath.  “Pearls of the Vampire Queen” finds Nifft and Barnar attempting to steal a horde of pearls from a Vampire Queen who demands an annual sacrifice of a virgin man in return for protection for those on her land.  In “Fishing the Demon Sea”, the two are about to be executed, but are given a reprieve if they agree to rescue the noble’s son who was kidnapped by a demon.  This story finds the two on a subterranean ocean with Gildmirth, who is condemned to live in the underworld.  The three search for the son, who’s a thankless narcissist, only to find he is more interested in finding a powerful elixir than be rescued.  Lastly, “The Goddess in Glass” is a strange tale of giant rock-eating beasts and a dead goddess in glass that may be an ancient alien whom the natives worship.

I loved the first two stories.  I thought they were very interesting and inventive in their world building.  Like all four tales, they were very dark, with bizarre demons and creatures.  They were just the right length for their plots.  The prose was stunning.  I was not expecting anything so literary.  The word choices were amazing without seeming self-aggrandizing.  That is not easy to pull off.  So many authors easily get into a “look at me, I have a big vocabulary” mode that detracts from the story.  I felt that Shea’s prose was devoid of anything like this.  It was simply marvelous to read.

The third story was a bit more difficult to get through.  There were a lot of scenic descriptions which frankly I found boring after a while.  I realize the intent was to be in awe of this strange underworld sea and demonic civilization, but it dragged for me.  It did not have the spark and freshness of the first two.  However, I really liked the character of Gildmirth.  He was a benevolent guide who had keen insight.  It was nice to have such a kind character show up in a world of pain and horror.  He is perhaps the best defined character in the whole book.

The last story was back to the pace of the first two.  However, Nifft had little role in this story, perhaps because he wasn’t the narrator.  Out of all four stories, this was the most unusual, with its mix of fantasy and aliens.

I give this book four stars out of five.  Overall, it’s excellent.  If you’re going to read it, be ready for a challenge.  It’s not an easy read with its large vocabulary and intense prose.  It’s also not available in e-reader format and is not easy to find.  I got my copy from an InterLibrary Loan from Wisconsin.  But if you’re up for the task, I think you’ll enjoy it.  It’s a shame this book has not had more staying power over the years.