This is a surreal sci fi/fantasy novel that carries deep messages about animal rights, war, and genocide.  At first it’s funny, but quickly becomes very dark in its tale of a hyper-intelligent, yet insane rat that justifies cruel animal testing to the other rats and animals in the lab.  Winner of the 1977 World Fantasy Award, it shows its age with its feel of nouveau sci fi that was popular in the late sixties and early seventies.  At times it’s very boring, with Dr. Rat going over and over his justifications for animal testing.  Other times, it’s brilliant in how it gets its points across.  But overall, the effect is profound. 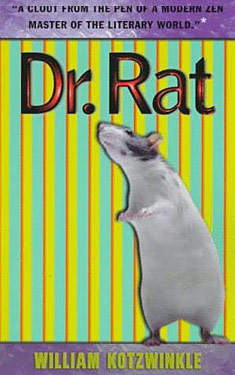 Dr. Rat is the result of experimentation.  Castrated at a young age, he was subject to tests that drove him insane and made him intelligent.  He has a PhD and has written papers on animal experiments.  He tries to calm the fears of the other animals in the lab by explaining how the cruel torture they endure is for the good of science and the US.  One day, the other rats decide to revolt against their captors and escape from their cages.  They build up an army to subdue Dr. Rat and escape.  At the same time, all the animals around the world getting visions of a great meeting, the subject of which is not known.  All the animals on the all continents begin to gather in huge numbers, laying aside their natural instincts to attend this meeting.  Dr. Rat tries to thwart the revolution as authorities try to thwart the animal meeting.

It’s hard to describe the different aspects of this book.  Dr. Rat is the main character.  I guess he’s well developed because pretty quickly, you get that he’s nuts.  He sings morbid songs, talks in rhyme, and reminds you of the apologists who tried to defend the Holocaust as nationalism.  Throughout the book, we meet other animals, who are hearing the call to the meeting.  Elephants, hyenas, sloths, turtles, dogs, and many others explain what they’re hearing and feeling.  The chapters mostly alternate between the Dr. Rat narrative and that of the other animals, which at first was really confusing, but by halfway through, you get.  I really did empathize with the other animals, hoping for some intense divine revelation for them.

The prose is good, too.  In general, I liked the way it was written, including the some of the insane thinking of Dr. Rat.  Not too flowery, but good word choices and descriptions.  I didn’t get all of the world building.  Specifically, there was some kind of transmission of the gathering of the animals that was being broadcast via some kind of wheel the rats powered by running.  I never really got it and had to just accept it as it was happening.  But that was how the revolution of the rats was being supported, by hearing about all the other animal meetings around the world.

The message of the book is pretty heavy handed.  You quickly realize this is at least about animal cruelty in scientific testing.  And with the dark tone of the book, it’s hard to actually enjoy it.  It’s a book to be experienced, not necessarily enjoyed.  I give it four stars out of five.  I knocked off a star because in the middle of the book, the ramblings and justifications of Dr. Rat get pretty tediously repetitive.  During those sections, I looked forward to the chapters of the other animals.  The book and its chapters are short, so you don’t have to sit too long with the crazy musings of Dr. Rat too long at any one stretch.  This book is not for everyone, especially if you’re sensitive to animal cruelty.  But if you can stomach it, you’ll definitely have a visceral reaction.