I really love Miller’s writing, even when I don’t necessarily like the story.  It always seems effortless in its descriptions and word choices.  It’s funny, I saw Miller very recently at Powell’s Books, his tour for this collection of short fiction.  He read an excerpt from one of the stories and said that he saw a sentence there that he would write better if he were writing it today.  What’s funny about that is that I thought all the sentences flowed so beautifully, from his early works in the collection to the later.  This book is filled with wonderful prose, important themes, and bizarre, genre-bending plots.  From a story told from the point of view of an old couch to a world where King Kong was real, it’s simply joyful and profound. 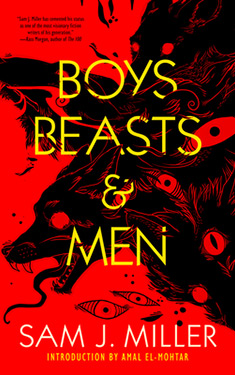 I first read Miller when I discovered he wrote Blackfish City and was gay.  Before I acquired Blackfish, I read all the short fiction I could find on different publishers’ websites.  I loved it.  When I finally read Blackfish, I was a little let down.  The world-building and prose were great, but overall, couldn’t get into the plot.  Next, I read his gentrification-horror novel, The Blade Between and loved it.  Now with this third book, he’s really cemented himself as one of my favorite writers, along with the likes of Craig Laurance Gidney, Nnedi Okorafor, and TJ Klune.  I have a lot of favorites these days, having read so many books, but these are a few that I’ve really come to enjoy and look forward to their next release.

I loved almost all the stories in this career-spanning collection.  It’s hard to categorize them as horror, fantasy, or science fiction, hence the term genre-bending.  And the part of the story that makes it this is always a little weird.  But they all have common themes, like family, community, gentrification, abuse of the disenfranchised.  Most of the stories come from a gay perspective, with at least one character being LGBTQIA.  One of the most intense stories is “Angel, Monster, Man”, which is about three gay men during the early days of AIDS who concoct a fictional person through which to publish the unpublished works of artists who have died of the disease.  They publish stories, poetry, photos, all of which become huge hits.  It galvanizes the gay community into action, but along the way, the fictional person becomes real and haunts the three.

It’s really hard to pick my favorites of the collection, which is my usual modus operandi with reviewing collections or anthologies.  So I’m going to randomly choose a few others to note.

“Shattered Sidewalks of the Human Heart” is the King Kong world story.  A taxi driver picks up Ann Darrow, the woman King Kong fell in love with.  They talk about Kong, the driver admitting crying when Kong fell and died.  They bond quickly and Darrow shares a secret piece of Kong that she has hidden, giving it as a gift to the driver.

“Calved” was a horrific story of misdirected love and misunderstanding.  It takes place in the same post-global warming world of Blackfish City.  A divorced dad comes back to visit his son after many months on an ice boat.  His son, now a surly teen, hardly communicates with him.  The dad gave the son his favorite tee shirt once, but the son know longer has it. Thinking it was stolen by a bully, he goes after the thief.  This one was just devastating, even though it’s easy to see what’s coming at the end.

Those are just a sampling of the stories in this awesome collection, which I give five stars out of five.  Almost every story punched me in the gut in some way.  I think this book is a great way to become acquainted with the brilliant gay young writer, one who I hope we will continue to see in the future.