The Mote in God’s Eye

I wasted a week of my life on this tedious book and I want it back!  Reading this book was one miserable experience.  I found it to be uninteresting, overly complicated, overly sprawling, and without focus.  The ending didn’t even feel like an ending.  It’s like the authors ran out of paper and said, “Oops, it’s over”.  It’s also very early ‘70s, a sausage-fest of an expedition with one woman and all the rest men.  There was some commentary on slavery which can be construed as satire or racist.  I couldn’t figure that out.  The only parts I liked were the initial introduction to the aliens and a committee debating the fate of the aliens near the end.  Everything else was cardboard military space opera and mildly original aliens.  I wonder if I read this book when I was in high school if I would have liked it.  Somebody liked it because it was nominated for a Hugo and a Nebula in 1975. 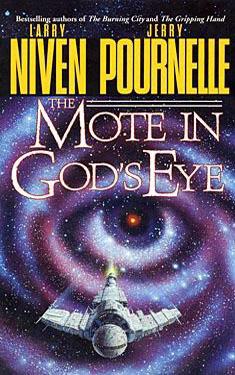 The galaxy is in the Second Empire after the collapse of the First Empire due to scads of revolting planets taking it down.  The Second Empire is held together by a vast naval fleet which uses the Alderson drive for faster than light travel.  One day an alien ship is spotted entering the area around New Caledonia.  Captain Rod Blaine captures the ship and finds a dead alien in it.  They find that it comes from a red supernova area known as Murcheson’s Eye and specifically from the yellow sun in front of it called the Mote.  The Emperor commissions two ships to go to the Mote and meet the aliens and figure if they are a threat to the Empire.

The aliens, called Moties, are almost interesting.  They are kind of mammalian with two nimble right arms and a thick powerful left arm.  They are more or less lopsided, as if they evolved without gravity.  Their society is divided into castes: the whites are the masters, the browns are the workers, and the hybrids are the mediators.  The mediators speak for the masters and keep the browns from revolting.  There are also subspecies, including miniatures called Watchmakers who repair and enhance mechanical things.  The subspecies are considered animals.  So yeah, commentary on slavery, satire, or racist.  Hard to say.  But it felt icky.

The humans have a 19th century-like empire structure, with the Emperor, marquises, and barons.  It’s patriarchal and the navy is completely populated with men.  And they are all pretty much cardboard characters.  There were a few who stood out:  Blaine because he was the main character, Sally because she was the only woman, the admiral because he was Russian, the engineer because he was Scottish and spoke with a brogue, the merchant because he was Muslim, and Jonathon Whitbread because I kept on saying “white bread” whenever I saw his name.  The cast of characters is two pages long and inevitably, the men were hard to tell apart.  I couldn’t identify with anybody.  Blaine was particularly annoying towards the end of the book when he gets engaged to Sally and he starts calling her “kitten”.  Ewwww.

Besides the usage of “kitten”, there was another word used that gave me the willies.  They liked to use the word “rape” as a pejorative exclamation.  I had one friend say it may have come from the phrase “rape and pillage”.  Regardless, it made my skin crawl.

The characters of the Moties were pretty interchangeable as well.  When the mission to the Mote sends a landing party down to the surface, the Moties pair mediators with each of the humans.  They learn Anglic very quickly, although their language of screeches and whistles eludes the humans.  Not only do the Moties learn the human language, they begin imitating their assignees and their accents and mannerisms.  So, since the humans are pretty hard to tell apart, so are the Moties.

It’s no surprise to my regular blog readers that I’m not a military or space opera fan, but I am regularly astonished when I like a book of these sub-genres.  I thought I would like this one from the summaries I read.  But within fifty pages, I knew this would be a slog.  I did find one part of the book interesting.  It’s toward the end, and surprisingly it’s a sequence where a committee tries to decide whether to trade with the Moties or not.  It was one of the few sections that I though was clearly written and the characters were actually differentiated.

I give this book two stars out of five.  I wanted to give it one star initially, but thinking about it as a whole, it’s slightly better than the sum of its parts.  I’ve only read one other book by Niven and Pournelle, “Lucifer’s Hammer” (no review).  I read it in high school and listened to it on audio a few years ago.  I thought it was fairly well put together despite being a disaster novel.  Mote seems slapped together.  Niven and Pournelle published a sequel nearly twenty years later.  I have absolutely no interest in reading it after this book.