The fourth novella in the Murderbot Diaries was just as good as the last one, Rogue Protocol.  It was a little more interesting because it circles back to some of the characters from the first book, All Systems Red, which I read quite a while ago.  It was nice to come back to these characters and get some decent characterization even though it’s been so long.  The prose is still terrific.  These books all could have made one really good 700-page novel, but I’m glad they were broken up into novellas.  Because the science is relatively hard and the writing filled with technical jargon, I think it would have been an exhausting read.  As individual stories, these have been just right. 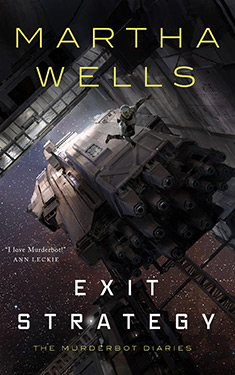 This story follows Murderbot after it gets incriminating evidence against the dastardly mega-mining corporation GrayCris.  It has discovered that Dr. Mensah has been kidnapped by GrayCris which is demanding a ransom for her release.  Murderbot tracks down a trio of Mensah’s associates, revealing itself to them cautiously, as it still does not have full memory of the tragedy it instigated that started this whole cycle in motion.  They all reunite and scheme to get Mensah free and GrayCris indicted.

The character development of Murderbot comes to a sort of conclusion in this book.  It (we are never told if Murderbot has a gender, although in the second book, ART offered to give it physical sexual characteristics) reluctantly admits that it has enhanced its human side and now has feelings.  Remember that Murderbot originally eschews human contact and would rather spend its time watching soaps.  But here it recognizes its feelings for Dr. Mensah, its original owner and dare-say, friend, in the pursuit of her escape.  We only get a little development of Mensah and the other characters, but they slip right back into the intrigue.  I was impressed that the secondary characters were so believable and easy to accept into the story.

The prose and the dialogue are still quite good despite being filled with technical jargon.  The only time I had problems with it was in the first book.  I got into the swing of the jargon in the second book and have kept up with it pretty decently.  It can be exhausting at times but it flows naturally and is quite readable.  And despite Murderbot’s growing awareness of its own feelings, it still maintained the snarkiness that has made it endearing throughout the cycle.

I don’t have much more to say that I haven’t already said in the previous books’ reviews.  So I’ll just say that I give this book four stars out of five and this four novella cycle four stars as well, even though I didn’t care for the first book quite as much.  I think it’s a good thing to read these books in relatively quick succession to keep up the excitement of Murderbot’s journey.  I really look forward to the novel next, which has been nominated for the Nebula, the Hugo, and the Locus so far.