The Bear and the Nightingale

This was a beautiful book.  It had gorgeous prose and wonderful worldbuilding.  The author studied Russian culture and folklore in college and it is evident in this story about a Russian girl who sees the spirits and pagan gods and the conflict that causes with her stepmother, the family priest, and the townspeople.  My only struggle with the book was that it was a slow burn.  It takes most of the book to get on with the plot, and the gods and spirits are very slowly introduced into the story.  Otherwise, this book is nearly flawless. 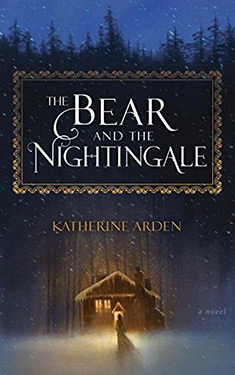 The story begins with Pyotr and Marina.  Pyotr is a wealthy landowner in the North of Russia.  They have several children, but Marina wants one more so that child will carry on her legacy of interacting with the world of the spirits.  Marina dies shortly after Vasilisa is born.  The majority of the book is anecdotes from the childhood of Vasilisa, or Vasya, during which she begins to have interactions with the spirits.  Eventually Vasya’s father remarries through an arrangement made by the Grand Prince of Muscovy.  His new wife is considered mad because she sees demons.  This puts her into direct conflict with Vasya.  Also, the family priest dies and the Muscovy Patriarch sends an upstart priest who paints icons and has developed a cult following in Moscow.  He too ends up in direct conflict with Vasya, considering her a witch.  The plot then thickens when the evil twin of the Winter-King tries to claim Vasya so he can be released from the bondage in which the Winter-King has him subdued.

The lush prose is simply marvelous.  It reads like a fairy tale.  But life isn’t easy, as is the case of traditional fairy tales.  Vasya’s stepmother is horrified by the demons.  She wanted to enter the convent but ended up married to Pyotr.  Their marital relations are basically non-consensual and produces a daughter.  And she dotes on her own daughter while reviling Vasya.  The priest also hates Vasya and secretly lusts after the teen.  Of course he blames her for his behavior and wishes she were dead or sent to the convent.  And in general, the role of women is to be married or enter the convent, anything else makes the woman suspect, i.e., a witch.  I suspect the author was going for authenticity with respect to the lives of women in the 1300s in Russia.

The character development is well done as well.  With the anecdotal quality of the first two thirds of the book, we get a good sense of the family and the priest.  Vasya is easily likeable and her stepmother and the priest are quite the antagonists.  But they are very human and three dimensional.  The horses are also characters.  Vasya can communicate with them and several develop distinct personalities.

I give this book four out of five stars.  While reading the first two-thirds, I was toying with giving this only three stars because it took so long to form the plot.  But when it did finally get going, I had found myself immersed in the world Arden created and was with the plot one hundred percent.  This book is the first of a trilogy.  It ends cleanly, no cliffhangers.  But it clearly leaves the story open for continuation.  I’m probably going to pick up the next book soon, as I do want to find out what Vasya does next.