What a powerful book.  This is the second book of Thomas’ to win the Lambda Literary Award for SF/Fantasy/Horror.  It's the tale of a serial killer.  There's a little supernatural thrown in there as well.  It mixes the thriller with a coming of age story and a gay, apparently immortal German refugee in World War II era Texas.  It’s well-written, poignant, and thrilling.  I’m not much of a reader of thrillers, so I’m not used to the emotional rollercoaster that these sorts of books can put you on.  This book had me gripped from beginning to end.  A few of the thrillers I’ve read have lulls in them as the detective or PI tries to put together the clues to try to solve the mystery.  But I never felt like there was a lull in this book.  Even when the focus wasn’t on the murders, it was interesting and emotionally charged. 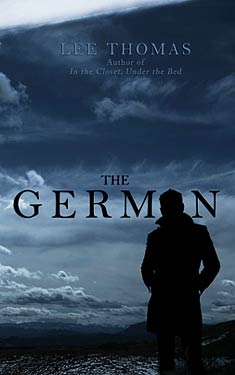 In 1944, Tim Randall lives in the small town of Barnard, TX.  It has a fairly large minority of Germans living there, many who just recently emigrated there to escape the Nazis.  This sleepy town is awoken by the brutal murder of an older teen and the evidence indicates it’s a Nazi sympathizing German resident.  The note left by the murderer indicates this is the third in a string of murders.   Tim lives across the street from a German immigrant, Ernst Lang.  While the town becomes suspect of all the Germans living there, a string of events leads Tim to believe that Ernst is the murderer.

Tim is twelve years old.  Summer has just begun.  He spends the days with his best friend Bum (his real name) trying to escape the heat.  His father is in France in the war and his mother works an evening shift at the factory to support the family.  Through an act of kindness on Ernst’s part, Tim befriends him, despite the public opinion that the young people should stay away from the Germans in case one of them is the murderer.

Ernst is the German.  He seems to have survived being executed in Germany, having died but finding himself outside his grave, then escaping to America.  Ernst is gay.  He keeps to himself, but makes no bones about it if asked directly.  He has a dark past from his days before emigrating, but generally lives a quiet life making rocking chairs and selling them at a local store, and having quiet liaisons with the closeted men in the community.

Tom Rabbit is the sheriff investigating the murder.  He struggles to stay sane and focused while the whole town goes crazy over the events that are unfolding.  A second boy is found murdered, and a third goes missing.

This book is about racism and scapegoating.  It may be about the Germans, but it also is representative of all the racism and scapegoating that comes with war, like that of the Japanese and now the Muslim communities.  It’s also about homophobia, and the atrocities that come from that as well.  And being 1944, homophobia is cast in stone by sodomy laws and the medical community.  It’s a time of intolerance, fear, and misplaced patriotism.  From many angles, it’s not much different than today.

“The German” is equally exciting and poignant.  I liked the way story unfolded through the three narratives.  Most specifically, I enjoyed reading the sections from Ernst’s journal.  We get to see a slice of life living as a gay man in a tough time and place.  We find out about Ernst’s life in Germany during the rise of Hitler.  I was also really caught up in the mystery, not figuring out who the murderer was until near the end.  The good thing though was that it was not a police procedural.  It was more about the psychological effects on the townspeople, as experienced by Tim, Ernst, and the Sheriff.  I give this book five stars out of five because I read this book in a day.  I simply couldn’t put it down.  It’s about the most engrossed I’ve been in a book for a long time.  It had a strong emotional impact on me, mostly because of Ernst’s journal entries, and that’s what pushed it up from a simple four star book to a five star experience.