There is a warmth to this book that is wondrous.  It had the same effect on me as did “Jonathan Strange.”  Whenever I picked it up, at home when I had time, or on the train to work for 8 pages at a time, the prose of the book put me in a wonderful place. 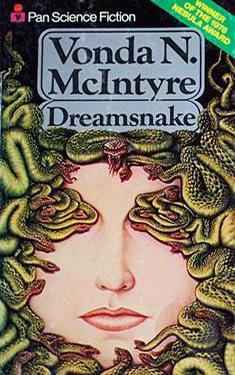 The basic plot is that of a quest, but it is so much more than that.  First, it’s the quest of a woman, the first female main character in a Hugo winner, if memory serves me correctly.  Second, the woman is a healer who produces vaccines and cures through the manipulation of venom from snakes.  She is a doctor in a post-apocalyptic world that fears snakes.  Third, through her journey, she heals those around her mentally and emotionally, while trying to heal herself.

There are several analogies that are easy to make.  It’s about power of and struggle against addiction.  That one is obvious.  It’s about the hoarding of knowledge and the breakdown in society because of it.  It has a ring of Christian mythology, the journey of a “miracle worker,” dying to one’s self, being lowered into the depths of hell, and even a crucifixion/resurrection motif.

Despite all these themes that run through the book, it all comes down to the main character.  She is strong, determined, compassionate, charitable, and loving.  She is also flawed and filled with self-doubt.  Within the first chapter of the book, I loved the character.  I wanted to see the journey to the end.

There is only one complaint I had with the book.  The last chapter was a little too “nice”.  I don’t want to write a spoiler, so suffice it to say, there’s a happy ending.  But I didn’t count this against my final rating of the book.  I just did not want to put it down.  I got the book the day before my first day at a new job.  After the first chapter, I was angry that I hadn’t gotten the book while I was still unemployed, when I would have had time to finish it in just a few days, instead of a week.  That’s how much I enjoyed it!  Five stars.
Posted by Stephen P at 7:42 AM